Penguins of Madagascar
By: Bill Gibron

And we're all out of Minions.
Buy It From Amazon
Buy It On DVD
Buy It On Blu-Ray

Thanks to CGI, Pixar, and the unbridled popularity of the electronic babysitter now known as the animated family film franchise, studios no longer have to try. Creativity is consistently trumped by cash, it no longer being a question of art, but available ATMs. It’s gotten to the point where something slight like Penguins of Madagascar will make incredible bank at the box office for two very solid business reasons: (1) kids have no aesthetic appreciation, easily drawn to bright colors moving rapidly in front of their eyes (usually in 3D), and (2) the international audience guarantees that the domestic number no longer matters.

It bears repeating that the each of the previous three installments in the Madagascar series have either doubled or tripled their money in the foreign market, meaning what you or I think of the end result doesn’t really matter to the bean counter waiting for weekend totals from China to filter in. Such a lack of caring shows up throughout this otherwise ordinary film, an attempted spy spoof which has the added audacity to offer its own crack at yet another spin-off within same. Indeed, since 2009, Nickelodeon has been given TV tykes the adventures of these smart alecky flightless birds, and now they’re adding a group of undercover heroes to up the new franchise factor.

Basically, the narrative is a battle between our title critters — a quartet of fowls named Kowalski (Chris Miller), Skipper (Tom McGrath), Rico (Conrad Vernon), and Private (Christopher Knights) — and two outside forces. One is Dave, otherwise known as Dr. Octavius Brine (John Malkovich), a mad scientist with an equally evil plan. The other is an animal special ops group known as The North Wind, featuring a mysterious leader, a wolf named Agent Classified (Benedict Cumberbatch), and his associates Eva (Annet Mahendru) the Owl, Corporal (Peter Stormare) the Polar Bear, and Short Fuse (Ken Jeong) the Seal. Their faux spy exploits see them travel from the South Pole to Venice to Shanghai and several points in between, all in a mad dash to stop Octavius, and part your hard-earned cash from your already tapped wallet.

When Werner Herzog narrating your film’s fake documentary is the best thing you have to offer, you instantly recognize the limitations facing anyone over the age of 10 whose been dragged by their underlings to this non-stop collection of chaos and chattering. Relentless in its desire to never lose the wee ones’ already microscopic attention span, Penguins of Madagascar just keeps throwing things at them, believing that nothing is more deadly to the demo than a moment of rest. While it sits back, smugly, and congratulates itself on jokes no child will get (what third grader listens to NPR?) it lowers the collective IQ of anyone who’d get said reference.

Listen, there is nothing wrong with pandering. Today’s media has bet billions on it. But Penguins of Madagascar wears its focus grouped garishness like a point of pride. It understands that after the 17th viewing of Big Hero 6, a child’s restless entitlement needs an alternative dose of digital adrenalin. Like a wild kids’ party where everything is loud, shiny, and way over the top, this film feels like the kind of diabetic shock one gets from an overdose of eye candy. Besides, didn’t the behind the scenes team here learn nothing from Cars 2? Taking beloved characters and putting them in an ersatz espionage setting may seem like a great idea (this is apparently the premise of the TV series), but in practice, it’s redundant. Heck, even the Flintstones tried it back in 1966.

Adding the North Wind (and all their accompanying fart references) is just another aesthetic slam, nothing more than a setup for a future standalone title. Sure, it’s harmless and hackneyed, but it’s also an indication of how preconceived and prepackaged it is. Penguins of Madagascar may deserve their own moment in the movie sun. This, however, feels more like an entertainment eclipse. 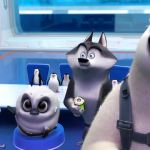 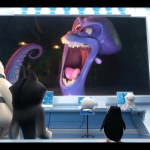 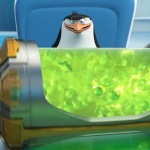