Peeples, sheeples.
Buy It From Amazon
Buy It On DVD
Buy It On Blu-Ray

Sometimes, earnestness can overcome cliché. There are also cases where actors and their innate likeability can surpass the slights in a script. Such is the case with Peeples, an otherwise ordinary Meet the Parents by way of tame Tyler Perry rip-off which sees the noted African American entertainment entrepreneur lending his considerable commercial credentials to a project which, probably, didn’t need them in the first place. While writer/director Tina Gordon Chism doesn’t have the chops to invest her rich vs. regular guy farce with a sense of uproarious absurdity, she’s hired a cast whose come prepared to try, and their efforts eventually win us over.

After being a couple of nearly a year, child entertainer — and part time “kounselor” — Wade Walker (Craig Robinson) wants to pop the question to his seemingly uptight attorney girlfriend, Grace Peeples (Kerry Washington). The only problem is, he can’t find the right time to do it, and this upcoming weekend is out of the question as she is headed up to Sag Harbor in the Hamptons to be with her family for the annual Moby Dick Day.

It will give Grace a chance to  reconnect with her snooty, upper crust brood: Judge Virgil Peeples (David Alan Grier), her former ’70s soul singer mother (S. Epatha Merkerson), big sister/CNN reporter Gloria (Kali Hawk), her “gal pal” Meg (Kimrie Lewis-Davis), and wannabe rap thug baby brother Simon (Tyler James Williams). Convinced to crash the reunion by his brother (Malcolm Barrett), Wade arrives unannounced and soon learns that no one in the clan has ever heard of him. Even worse, he soon learns that Grace was right to hide his existence. The Peeples think Wade is a worthless waste of working class space.

And thus begins the entire decent dude/dumb rich folk funny business that Peeples preys upon. Sure, the opening scene where our hulking hero sings a song about urine is cute and clever (he is trying to teach young kids to express themselves in more “constructive” ways), but then Ms. Chism — who wrote the scripts for ATL and Drumline — brings the song back. Twice. Similarly, when we learn that Mrs. Peeples used to be a diva ala Patti LaBelle and had a huge hit that was a big part of Wade’s life, said situation is mentioned over and over again. Such repetition doesn’t ruin Peeples, but it does argue for the limited appeal of discovering what each of these well-off snobs have to hide.

Eventually, we get the accusations of infidelity, the closeted lesbian, the criminal kleptomaniac, and the revolving door rehab addict with a penchant for growing psychedelics in the gardens of the expensive seaside estate. While this material is expected, it’s also unnecessary. Wade, as essayed by Robinson, is so good hearted, so willing to accept the Peeples on face, that it would have been funnier to see him struggle to meet their increasingly out of touch demands. Instead, much of the script is spent setting up the secrets so the eventual denouement will pay off. What Chism should have focused on was the ethnic divide between Wade and the Peeples. The whole “acting white” aspect of the narrative is minimized in order to provide more opportunity for fat guy antics and reiterated archetypes.

Peeples probably didn’t want to address the divide between economically diverse African Americans. It’s not that smart or savvy. Instead, it plays to the expectations that such a “guess who’s just showed up for dinner” dynamic, and thanks to the performers present, manages something watchable, if not wholly worthwhile. 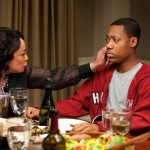 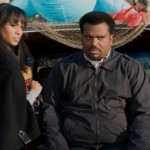 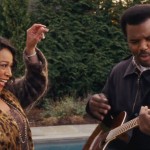