We need more Cheetos, STAT!
Buy It From Amazon
Buy It On DVD
Buy It On Blu-Ray

The funny fat man. The jolly plus-size jester. It’s a trope as old has Hollywood. From silent star Roscoe “Fatty” Arbuckle to John Candy in the ’80s and ’90s, being overweight in Tinseltown guarantees two things: (1) numerous roles that rely on your size and shape to elicit laughs, and (2) very few opportunities beyond that. This year’s man-boobed model is Kevin James, an FoS (“Friend of Sandler”) who has made a nice living out of using his fluctuating girth as a buffer to better scripts and more serious roles. His latest is a sequel to the surprise hit Paul Blart: Mall Cop. In this instance, the revisit is just as repugnant as the first go round.

James is the titular character, a piggish schlub who spends his days guarding the dying social center known as the shopping mall. When he gets a chance to attend a security convention in Las Vegas, he loads up his clueless heft and his teenage daughter (Raini Rodriguez) for the trip. Once there, he becomes embroiled in a plot by a fiendish mastermind (Neal McDonough) to steal priceless art from the Wynn Hotel and Casino. He also becomes convinced that the hotel’s general manager (Daniella Alonso) is warm for his stocky form. While trying to thwart the bad guys, Blart becomes a punching bag for all manner of sloppy slapstick and obvious product placement.

After banking $183 million on its $26 million budget, and considering James’ continuing relevance as a syndicated sitcom fixture (his King of Queens continues to play, eight years after leaving the air), a sequel to Paul Blart: Mall Cop makes sense. People obviously enjoyed its mixture of mindless narrative and over-emphasized shtick, and no studio suit has ever gone broke underestimating the viewing public’s proclivity toward stupidity. But Paul Blart: Mall Cop 2 is an affront. It is destined to go down as one of the worst films of 2015, if not the decade as a whole.

Gone is anything remotely entertaining or endearing. In its place are endless sequences of James falling, running into things, and being physically abused by objects both inanimate and CG-ed (like a carriage horse). This is the kind of film that feels that a character’s marital woes (James’ joke of a man gets married, and then divorced, in six days) and the death of his mother (Shirley Knight ends up under a milk truck) make for a great opening salvo. It then sends him along on a Segway, finding more and more manipulative ways to throw him off the people mover. Once the heist subplot starts, James is joined by fellow full-figured comedians Loni Love, Gary Valentine (James’ older brother), and Shelly Desai, to increase the body bulk vs. bad one liners quotient.

Nothing here is remotely salvageable. It’s like watching a YouTube clip collection of the World’s Lamest Slapstick. Physical comedy is an art. Watch The Three Stooges circa the late ’30s for a flawless example of this maxim. Here, James’ size is all the setup the filmmakers need. Want to see him screw up a high priced Vegas water pageant? Done. Need to see him scuttle around the Wynn Las Vegas and Encore Resort like a deranged duck? You got it. Want warm and squishy scenes with his college bound daughter? OK, but we’d much rather have more moments of the character’s face finding the floor and visa versa.

The sad thing is that James himself created this affront (with the help of Nick Bakay) as a showcase for his talents. What does it say about the actor that he feels the need to play a clueless creep who can’t seem to stay vertical for five minutes? Or that has to constantly feed his face lest his blood sugar drop to dangerously low levels? In a culture currently obsessed with body shaming, Paul Blart: Mall Cop 2 is the cinematic equivalent of bullying — both for the actor and audience. 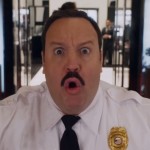 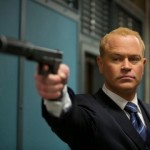 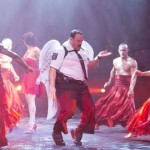