Baker's man!
Buy It From Amazon
Buy It On DVD
Buy It On Blu-Ray

Patricia Dumbrowski doesn’t look like the prototypical rapper, but Patti Cake$ only poses like a different kind of underdog story. The heart and pluckiness, and credible rapping talent, of its lead only carry the film so far before spirit is replaced by genre demands. This mixtape is full of over-sampled cover tracks that may give goosebumps in the moment before getting lost in convention.

Patricia (Danielle Macdonald) is an overweight New Jersey 20-something who’s endured the cruel nickname “Dumbo” since childhood. In her dreams she’s Killa P, aka Patti Cake$, a famous rapper who hits the stage with her idol, the infamous MC named O-Z. The dream sequences feature some fun raps, but their emerald tint and the name of the larger-than-life hero typify the plain influences portioned out by writer/director Geremy Jasper. Essentially, we follow Patti and her loyal hype man/pharmacy tech Hareesh (Siddharth Dhananjay) on their quest to escape the lower-class Jersey suburban wasteland and make those dreams reality.

That journey has many fits and starts, stalled by an uncertain mix of tones. With overhead shots of the sprawl and the tantalizing Manhattan skyline in the distance, Jersey is framed as an overwhelming environment full of crushing financial demands and lack of prospects, but there’s barely any registering of actual struggle. The insults from peers and blue-collar bosses, and the casually cutting language from her aptly-named mother Barb (Bridget Everett) aren’t Herculean obstacles for Patti to overcome, and it’s easy to see her take them in stride when almost every potential problem is tagged with a pedestrian joke. Patti’s wheelchair-bound grandmother (Cathy Moriarty) exists to rack up troublesome medical bills and provide some geriatric-in-the-rap-world humor, until it’s time for some insincere solemnity. The real world of the film feels almost as quaint as Patti’s daydreams, which at least provide insight into the budding artist’s state of mind, including a moment when she gets lost in music and starts to float on air.

Macdonald provides a feisty beating heart for the story, exuding a mix of attitude and occasional doubt that makes her authentic. As dreamers go, she’s the genuine article and it’s too bad her Patti gets reduced to playing the one note required by the screenplay from scene to scene. She’s everything the film needs her to be, from put-upon family breadwinner to one-half of a romance with a fellow outcast (Mamoudou Athie), a recluse who self-identifies as Basterd the Antichrist. He also has some impressive recording equipment in his shack in the woods. Maybe he and Patti can learn to make music together, both literally and figuratively. Maybe even makeovers are involved.

Jasper struggles to match the energy of his star, mechanically working through sentiment. The toxic relationship between Patti and her mother, who had her own dreams of musical stardom dashed, is glossed over and arrives at an easy solution without much distress. Convenience also leads to Patti’s worlds colliding when by chance she arrives at the contemporary mansion of hero O-Z through her part-time catering gig. There, she learns that the man behind the curtain – or the gated driveway – isn’t what she expected, but to what inspirational end is undefined. His cold speechifying about one of the prized paintings in his gallery hints at significance without providing any. Such is Patti Cake$. 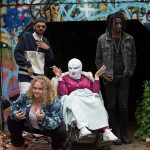 One thought on “Patti Cake$”