Keep it moving, folks.
Buy It From Amazon
Buy It On DVD
Buy It On Blu-Ray

There’s a problem at the core of Patriots Day, a problem that other critics have decried and criticized. For the most part, Peter Berg’s love letter to law enforcement, another in his ongoing fascination with actor Mark Wahlberg and minor men as heroes (Lone Survivor and Deepwater Horizon), uses the Boston Marathon bombing as the backdrop for a crackerjack procedural. But the man in the middle of this real life terrorism horror is fictional, a made-up everyman who seems to be in the right place at the right time to bring the bad guys to justice while saving lives like a blue Superman.

It’s this conceit which has many in the journalism game gagging, and with good cause. Patriots Day deludes itself by believing that you can take any dramatic real life event and fictionalize it without repercussion. Who cares if there were others involved in the investigation and arrest of the bombers–Mark Wahlberg’s the lead, so he will be the champion, no matter what history or the record has to say about it. It’s not to say the film is bad–it’s actually quite effective–but the subterfuge on display may leave a bad taste in the viewer’s mouth.

For the record, Wahlberg plays Boston Police Sergeant Tommy Saunders, the kind of good-hearted schmoe who sees fortune smile on him even when he doesn’t want it to. As penance for pissing off his boss, Police Commissioner Ed Davis (the always capable John Goodman), our hero puts on a vest and walks the finish line on that fateful 2013 day.

Suddenly, the bombs go off, and Saunders is a steely man of action, tracking down clues, making investigative assumptions, and helping those directly affected by the blast. As the FBI take over, in the persona of Special Agent Richard DesLauriers (Kevin Bacon), Saunders steps back, deals with his frightened wife (Michelle Managhan) and eventually helps find bomber Dzhokhar Tsarnaev (Alex Wolf) to bring him to justice.

Again, Patriots Day is a superb slice of CSI life and a rollicking, pulled from the headlines thriller. It may take liberties with the actual events, but we don’t really care. Hindsight is always 20/20 and in a case like this, where an entire city was shut down in order to avenge the fallen, it’s the ends that justify the means, even means made up for the sake of a cinematic storyline.

Wahlberg is his usual gruff, shuffling self, turning on the hometown accent and ratcheting up the machismo as he takes the act of terrorism personally. He’s like the living embodiment of baseball legend David Ortiz’s infamous F-bomb proclamation delivered the day after the bombers were captured.  The rest of the cast is also engaging, delivering the kind of performances that pulls us into the material and makes us care about the outcome (even though we already know it).

But is a film about a character who takes credit for the courage and conviction of others really playing fair? Should Wahlberg’s Saunders be seen as the end-all, be-all of police protocol and patience when, according to accounts, many others were involved? Had he not been shown as a singular hero, perhaps Patriots Day wouldn’t have this cloud cast over it. It keeps you on the edge of your seat, but not with truth. Instead, it’s all about one man and manipulates you into believing a wholly unreliable narrative.

That being said, you’ll still find Patriots Day a strong topical thriller. Director Peter Berg knows how to stage action and can keep the pace tight and electric. Again, there is a question of perspective here, but with right winning out against might, such a ruse is really unimportant. Being entertained is all that matters and Patriots Day definitely delivers in that capacity. 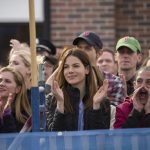 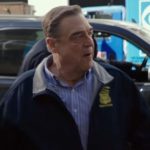 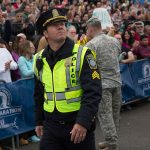 One thought on “Patriots Day”