Too much TV is bad for your eyes and soul.
Buy It From Amazon
Buy It On DVD
Buy It On Blu-Ray

When it began eight years ago, Paranormal Activity was considered a groundbreaking horror franchise. Though it borrowed heavily from the found footage concept more or less perfected by The Blair Witch Project, it added an undercurrent of technology that wasn’t quite yet available to those doomed documentary filmmakers. Oren Peli proved that people will literally jump at anything, using a surveillance strategy to show how an invisible demon drove one young couple to a terrifying conclusion.

Now, more than five films later, Paranormal Activity: The Ghost Dimension promises to bring closure to this creepshow claptrap. Delayed several times (it was originally set for an October release, two years ago) and showing all the signs of fright night flop sweat, this 80 minute endurance test will have you wondering what you did to deserve such torture. The plot makes no sense, the extended backstory gets more and more absurd, the new characters are a trial, and just when you think the movie can’t get any more desperate, some 3D is thrown in to show that, along with the subgenre, this film is ready to run with any gimmick.

The narrative sees a family moving into a new rental home. It’s 2013 and dad Ryan Fleeges (Chris J. Murray), wife Emily (Brit Shaw), and their precocious, curious, and highly impressionable daughter Leila (Ivy George) are looking for a fresh start. When they discover an old video camera and a box of VHS tapes, they learn that this house has a history (guess which cult used to live there?) and that, when looking through the lens, creepy shenanigans can be seen. Also, the home movies are of none other than those of Katie and Kristi. How convenient. Anyway, father goes bonkers trying to protect his wee one from her less-than-imaginary-friend Toby (Mark Seger) while lots of things go bump in the night. Then, in Act Three, subtlety shifts into CG overdrive as the title dimension comes after Leila once and for all.

If you thought The Marked Ones was a god-awful excuse for people acting illogically with camera equipment, Ghost Dimension trumps it in “what the hell are they doing?” spades. Most critics argue that the found footage ideal loses its believability when people who are otherwise in mortal danger continue to film the horror coming right for them. Guy with a huge knife? Gotta keep him in frame. Monsters with many rows of gore-drenched teeth? Everyone needs to see this. Ghost Dimension tries to avoid this by making the camera “a window onto another world,” but even then, the overriding sense one gets is not convenience, but contrivance.

And then there is the scares themselves. Like all other installments in this series, Paranormal Activity: The Ghost Dimension continues to confuse shocks with suspense. There is little attempt at building up to each jolt. It’s just one obvious jump scare after the next. Before long, you can predict them. Is the camera holding on something a bit too long? Has the soundtrack suddenly gone quiet? Get ready for another sonic (or visual) boom. Even in those moments where we are supposed to dread what happens next, we don’t. We’ve got this movie’s number and it’s definitely not 666.

Instead, Ghost Dimension feels like a failed send-off to one studio’s near-billion dollar windfall. Yes, these films have made more than $811 million around the globe, proving that even people in other parts of the world find this kind of fake fear fun. But during this sixth and final installment, there is no joy. There’s no sense of being taken on a riotous rollercoaster ride. Instead, Paranormal Activity: The Ghost Dimension feels exactly like what it is — a callous cash grab eager to milk the final few millions out of a once viable series. May it rest in peace and never come back. 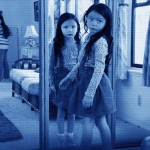 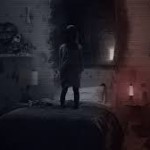 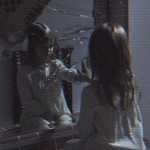 One thought on “Paranormal Activity: The Ghost Dimension”