Has your check cleared yet?
Buy It From Amazon
Buy It On DVD
Buy It On Blu-Ray

I’m not sure who exactly is paranoid in Paranoia. In fact, I’m finding it hard to recall a single recognizable state of mind or emotion shown by the cast in this completely flaccid film. It’s a techno age, paint-by-numbers corporate thriller with a mislabeled canvas. All of the standard elements are there, yet they’re presented so poorly the film makes little sense. Paranoia is almost better when trapped in convolution because at least then we’re halfheartedly trying to piece things together, and it distracts from the laughably hackneyed and implausible material.

A woefully miscast Liam Hemsworth is Adam Cassidy, a cubicle drone with big ideas stuck in neutral at a tech conglomerate. He’s operating in the unfair modern corporate landscape where the rich get richer by lying and stealing to fatten their bank accounts. We know all of this because he tells us so with his in-and-out Brooklyn accent in an opening voiceover.

After failing to impress boss Nicolas Wyatt (Gary Oldman) with a 30-second presentation, Adam and his team are unceremoniously fired. Lucky for them the well-oiled Wyatt machine fails to cancel their corporate credit card and the unemployed gang racks up a bar tab of several thousand dollars. To avoid being “prosecuted to the full extent of the law” Adam is strong-armed by Wyatt and his alliterative enforcer Miles Meechum (Julian McMahon) to infiltrate rival firm Eikon and steal information on the “game-changing” cell phone they’re set to unveil. Dull conversations and far-fetched, exceedingly uninteresting intrigue ensue.

With no suspicion, Adam is immediately hired by Eikon where he quickly impresses honcho Jock Goddard (Harrison Ford) with his nonsensical 30-second presentation skills. Of course he’s also involved with sexy marketing executive Emma (Amber Heard), with whom – gasp, out of the millions of women living in New York, he happened to have a one-night stand after being fired by Wyatt. The relationship is flat and undeveloped, continually dropped for technobabble and impossible cell phone antics, only to be picked up again to try and paint Adam as conflicted about his mission. There’s no balancing act between betraying Emma and using the windfall from his deception to help his dear old dad (Richard Dreyfuss) who’s suffering from emphysema. But wait, wouldn’t he be on Medicaid anyway?

The film isn’t concerned with practicality, and director Robert Luketic appears desperate to add some hype. Quick edits, speed-ramping of nighttime city traffic shots, and an outdated pulsing techno score are lame, and unsuccessful attempts to add some juice to the lifeless screenplay. Forays into sci-fi territory with cell phones capable of anything and cameras that can somehow ID passersby create a crater in the film’s already tenuous reality and, ironically, drain the film of tension… or paranoia. Several close-ups of oscillating cameras remind us that Big Brother is always watching. Whoever Big Brother is, I’m sure he’d be bored to tears watching Hemsworth bumble through this plot.

The plot resolves itself with multiple rugs being pulled out from underneath the characters and the audience, many that render the preceding action unnecessary, impossible, or both. The only mild joy amid the preposterousness is a brief face-off between Oldman and Ford doing their best to rise above the rubbish, succeeding for a fleeting moment. Alas, their exchange is but a brief hiatus from the silly hijinks that need wrapping up. Thankfully we finally get another voiceover to explain everything away. Generic in every possible way, Paranoia is a relic in its own time. 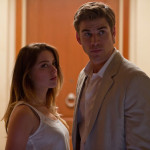 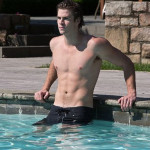 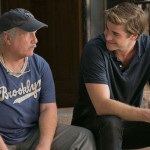