Stand to the left.
Buy It From Amazon
Buy It On DVD
Buy It On Blu-Ray

Paddington is the kind of movie Hollywood has forgotten how to make. It’s quaint and cozy, witty without resulting to an overuse of physical shtick or pop culture quibbles. It’s gentle and heartfelt, with a real respect for the character and his past. In the capable hands of Paul King, what could have been a disaster becomes a true family film treat. Even with the horrid way the final product has been treated by its U.S. distributor (Harvey Weinstein) and the last minute replacement as the voice of our hero (Colin Firth OUT! Ben Whishaw IN!) nothing could deter this delight.

For those unfamiliar with the likeable little bundle of fur, Paddington (Whishaw doing wonderful work) comes from darkest Peru. His family was befriended by British explorer Montgomery Clyde (Tim Downie) back in the day, and said adventurer extended an open invite back to Blighty. When tragedy strikes his family, Paddington is sent off to the UK, where he runs into the befuddled Brown Family. Mr. Brown (Hugh Bonneville) is a stuck in the mud risk analyst, while his wonder-filled wife (Sally Hawkins) illustrates books. Their children include the typical difficult teen girl (Madeleine Harris) and an overly curious boy (Samuel Joslin).

Along with their housekeeper, Mrs. Bird (Julie Waters), the Browns do their best to make Paddington feel at home. Hoping to reconnect with Mr. Clyde, they begin researching past British expeditions. They also seek the advice of antiques dealer Mr. Gruber (Jim Broadbent) while avoiding their nosy neighbor Mr. Curry (Peter Capaldi). But when Millicent (Nicole Kidman), the taxidermist for the Natural Museum discovers that a bear from darkest Peru is in her midst, she vows to stop at nothing to make this bruin part of her “permanent” collection.

Based on the work of English author Michael Brown and wearing its old fashioned sensibilities on its marmalade sandwich-stained sleeves, Paddington is an unqualified winner. It’s the kind of experience that revives one’s faith in the otherwise flagging fortunes of the kid-friendly genre. Granted, it may bomb with our contemporary wee ones, but whenever their angry moms and dads complain about there being “nothing good” for their children to see, a copy of this film should be shoved, gingerly, up their clueless noses. There’s even a message of tolerance and understanding as part of the slapstick subtext.

Give all credit to co-writer/director Paul King. From the moment the movie opens, he is in complete control. His vision is strong, making sure that every frame has something either memorable or magical (often both) to recommend it. He then uses his amazing cast (all are excellent) and Whishaw’s warm interpretation of Paddington to make us care about the outcome. Even when sequences devolve into complex physical comedy, the chaos is handled in a smart, Rube Goldberg-esque manner. In fact, it says a great deal about this film that we actually look forward to these moments of carefully choreographed bedlam.

Everything about this film is smart and satisfying, from the external look of London and the various locations to the internal inferences over immigration and diversity. Kidman and Capaldi have a wonderful, innuendo-filled conversation in which they basically paint “bears” in some of the most sly “stereotypical” ways possible. The kids may not appreciate it, but parents will bristle at the clever commentary. In fact, it’s safe to say that with the rash of ridiculous trash that comes out every year in the name of entertaining your offspring, Paddington is a significant cut above.

While there will be those who quibble with how Mike Brown’s literary work has been updated for the 2015 crowd, it’s a minor concern at best. Paddington is a thoroughly engaging and wonderful entertainment. It’s the right kind of big screen rarity — the good kind. 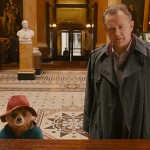 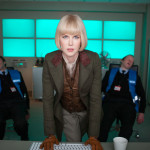