What a difference a director makes. Five years ago, Guillermo Del Toro was looking for that elusive big budget blockbuster that would elevate his career to new commercial heights. Combining his love of kaiju and robots, he came upon the script for Pacific Rim, eventually delivering a rollicking adventure filled with eye-popping action set-pieces and the director’s patented world building, attention to detail, and staunch sentimentality.

Fast forward half a decade and as Pacific Rim: Uprising arrives, Del Toro is nowhere to be seen (probably still sitting at home, admiring his Oscars for The Shape of Water). In his place sits Stephen DeKnight, and if you’ve never heard the name before, you’re obviously not a fan of Starz’s Spartacus or Netflix’s Daredevil. For his feature film debut, this novice has a lot to handle, and he doesn’t always do so with style or grace. Still, if you like seeing giant machines beat down massive monsters, this time minus the moody, rainy backdrops, and fairytale moralizing, you’ll be more than satisfied.

That’s right, Pacific Rim: Uprising is mostly more of the same, handled in a wholly hamfisted manner by a man with little grace behind the lens. As for the new story, it’s been 10 years since the last band of Jaeger pilots (the folks behind those massive mechanical warriors) defeated the steady stream of giant alien monsters coming from a rift in the bottom of the Pacific ocean.

Jake (John Boyega), the son of the late Stacker Pentecost (Idris Elba), is caught stealing robot parts for the black market. His adoptive sister Mako Mori (Rinko Kikuchi) gives him an option – go to jail or head a new Jaeger training mission. Guess which one he takes. It’s not long before a new band of heroes comes together to take on a nasty corporate interest–The Shao Corporation–and, wouldn’t you know it, more monsters.

There’s more to the story than this, but for a film with so much tangential plotting, Pacific Rim: Uprising is surprisingly generic. Without Del Toro’s glorified geek passion, without his love for the material and the makings of it, this sequel feels slight. The acting is fine, considering the cast spends most of their time trapped in a green screen hell making strange pantomime motions at nothing, but the heart is absent. Del Toro infuses his films with a genre joy. Uprising is nothing more than another slice of pre-packaged product ready to be easily consumed by the foreign market.

Sure, for those who can’t get enough of Michael Bay and his rock ’em, sock ’em, bore ’em shapeshifting automatons, Uprising will do the trick. It’s noisy and loud, and edited with a buzzsaw. In fact, the entire enterprise feels like a string of set-pieces stitched together with the barest of narratives. Do we really care that Charlie Day and Burn Gorman are back as the bickering scientists Dr. Geizler and Dr. Gottlieb, respectively? Their familiar faces make us smile, but they are reduced to reminding us of how much better they were the first time around.

As for DeKnight, he acquits himself rather handily, especially when you consider the turmoil surrounding this project. Universal hemmed and hawed so much about bringing this sequel to the big screen that they lost its soul. Think of Pacific Rim: Uprising as the TV remake version of the original–overloaded with sound and fury, but just like the Shakespeare quote points out, it ends up signifying nothing.

It’s a moderate entertainment that will inspire some and bore most. Eye candy is not usually so nominal. This time around, the robots vs. monsters concept just doesn’t have the same impact. In the first film, it was an pure fanboy freakout. Now, it’s just another piece of product to peddle to the rest of the planet. 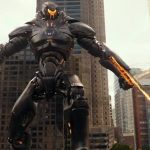 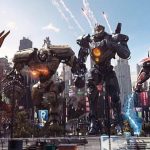 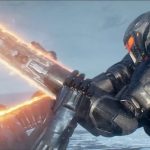