Wanna play a "bored" game?
Buy It From Amazon
Buy It On DVD
Buy It On Blu-Ray

While its roots can be traced back to 12th century China, the Ouija board didn’t become popular until 1890, and then, it was as a mere parlor game, not a means of “speaking to the dead.” It wasn’t until World War I when spiritualist Pearl Curran co-opted the harmless toy, turning it into a questionable means of communication with the other side (and fleecing unsuspecting believers). Now, 100 years later, Hasbro owns the rights to the slumber party staple and is trying to turn it into a formidable film franchise. After the 83-minute mediocrity that is Ouija the movie, one can predict a short run for this scare series.

When they were kids, Laine (Olivia Cooke) and Debbie (Shelley Hennig) loved to play with their Ouija board. They followed all the rules involving the planchette and various incantations, and enjoyed the feeling of relatively safe dread. Then, one night, during their senior year of high school, tragedy strikes. Laine tries to make sense of it, and calls upon her boyfriend Trevor (Daren Kagasoff), snotty sister Sarah (Ana Coto), gal pal Isabelle (Bianca Santos), and Debbie’s ex Pete (Douglas Smith) to hold a séance. There, they unleash something that stalks them, one by one. Thanks to a bit of investigation, Laine learns that the spirit of a little girl gone missing may be behind the horror. Contacting her aged sister (Lin Shaye), she discovers there’s much more to the spooky situation than a board game.

If all you care about are jump scares, moments when a movie dials down the action and the audio only to scream “BOO!” at exceedingly loud decibels, then Ouija will work for you. It offers nothing else except a slightly compelling backstory. No interesting or investible characters, no suspense or sense of doom. Screenwriter and noted production coordinator-turned-director Stiles White (The Possession, Knowing) couldn’t invest a scene with tension if he tried. Instead, we are inundated with one false alarm/soundtrack screech after another, our actors forced to react to nominal noises all in a failed attempt to prove that things going “bump” in the night are unnerving and unsettling.

It’s too bad really. The whole setup here — the obsessed 1940s mother using her gifted daughter as a conduit to the spirit world, only to be unable to bring her back or control her — sounds interesting, and when we get to the moments of confrontation, these ghastly ghouls are impressive. But White is more worried about creating depth for his victim fodder, and it just doesn’t work. After a half hour of various boring conversations, interspersed with a few gratuitous “gotchas,” we are supposed to care about Laine and her interchangeable associates. But since Ouija is one of those movies which requires a reveal, and then a false ending, and then another reveal, all this preparation it pointless. The movie becomes about its mechanisms, not its narrative.

That makes Ouija a low-rent rollercoaster in the cinematic equivalent of a broken down amusement park. You get the shouts and the screams, but not from anything inherently inventive or interesting. It’s all rote, like clapping at the end of a Congressman’s speech. We aren’t actually frightened, just programmed by decades of mediocre macabre to react as if we are. None of the actors convince us of their paranormal plight. They simply stand around and wait for another aural cue to inspire their faked fear. Some of the “kills” are inventive (you’ll never look at dental floss the same way again), but they’re not enough to warrant our time or attention.

Perhaps in the hands of an actual filmmaker like James Wan or Scott Derrickson this otherwise silly stuff could work. In this case, however, Ouija is as frightening as a game of tic-tac-toe, and about as complicated. And as predictable. 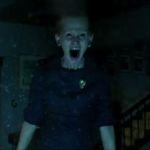 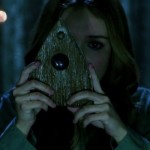 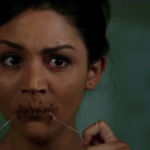 One thought on “Ouija”