Anybody got a mint?
Buy It From Amazon
Buy It On DVD
Buy It On Blu-Ray

Tell me if you’ve seen this one before: Guy wakes up in strange place with no memory of who he is or what his doing there and needs to unravel the mystery. Oh you have? Me too. While the amnesia thriller isn’t anything new, the important thing, of course, is what is done with the premise. And after an intriguing first ten minutes, Open Grave doesn’t do much. Uninteresting characters, a haphazard staging of their actions, and a clunky unpacking of a ragged plot weigh the film down, making for a tension-free struggle for answers.

A mystery man, played by the ever-interesting Sharlto Copley, comes to in a mass grave filled with dozens of corpses. He makes his way to a nearby home where a handful of others have just woken up, each with no memory of how they got there or who they are. All, that is, except a mute Asian woman (Josie Ho) who can only write in Chinese, which no one else can read. Suspicion is immediately directed at Copley’s John Doe outsider. The others all have IDs, all woke up in the house together, and have photographic proof they know each other. Another concern is a calendar on the wall with the date of April 18th (only two days away!) circled ominously. The bleary-eyed bunch now needs to scour the surrounding isolated wilderness for clues before their apparent deadline, after which “something” might happen.

The best films with forgetful heroes (or potential villains) ratchet up the suspense by placing us in their mindset, giving us their point of view to experience the desperation right along with them. Open Grave doesn’t do this at all; instead we’re passive observers, just tagging along as the group traipses through the woods, encountering bodies tied to trees, evidence of medical experiments, and CCTV cameras. Any revelations mean nothing in the present, however, and only serve as sparks for cryptic flashbacks. Many of the recollections are preceded by someone staring blankly into space and stating (out loud), “I remember,” before a foggy sepia-toned flicker shows the dragging of a body or a crucial piece of expository dialogue. Nathan (Joseph Morgan) even puts on his recovered pair of glasses before one of the remembrances, the specs complete with a broken lens to subtly suggest a fractured memory.

Writers Chris and Eddie Borey and director Gonzalo López-Gallego don’t use the hackneyed idea of scattered puzzle pieces with the expectation – or even the intention – of us putting them together. There’s no possible way to figure out the murky narrative before the filmmakers divulge their secrets through blunt character voiceovers. Open Grave becomes an open book in the final ten minutes, laying everything out on the table unceremoniously.

Aside from an unsatisfying conclusion that feels like ideas for three different horror/thrillers were tossed into a pot and stirred together, this approach doesn’t add any depth to what had come before and renders most of the film’s 102 minutes  meaningless filler. With no tension in the group dynamic – any distrust of John Doe only manifests itself as repetitive icy stares or momentary gun pointing – the film is all about getting to the reveal.  It’s similar to the empty experience of López-Gallego’s previous film – the abysmal found-footage space thriller Apollo 18 – though Open Grave at least has a measured performance from Copley to provide a semi-engaging throughline.

Supporting players barely register and perpetuate a disposable direct-to-video aesthetic with wooden readings of stilted dialogue. One of my favorites occurs when John Doe and Sharon (Erin Richards) encounter five strange, bloodied men swinging axes at fallen tree branches. Sharon astutely chimes in, with a serious tone, “Careful, I’ve got a bad feeling about this.” If you have a similar intuition when mulling whether to watch Open Grave, I would suggest trusting your gut. 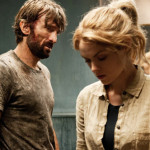 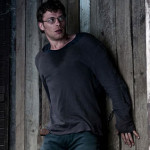 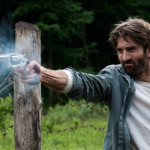