"Hello? Get me Rush Limbaugh!"

An opening title establishes that we are in “Barranca – Port of Call For America’s Banana Boats.” Where we actually are is a lush studio set with atmosphere to spare – a set designer’s wet dream – that bears little resemblance to anything remotely connected to reality. Into this hothouse artifice enters Bonnie Lee (Jean Arthur) strolling off a banana boat and into the erotic gaze of two flyboys – Joe and Les (Noah Berry Jr. and Allyn Josyln). They work for a tight-knit group of aerial delivery men in a rickety postal delivery service (the planes have to fly through a dangerous fog-bound passage in the mountains to make their deliveries), owned by Dutchy (Sig Ruman), who also runs the only bar and chop house in town. The boys argue over who’s going to take Bonnie out to a steak dinner, but work intervenes. Joe loses the toss and his life, risking everything to get his delivery done for that steak dinner. Enter supervisor Geoff Carter (Cary Grant) in an eye-popping ensemble, bedecked all in white in gaucho pants, stylish shirt, hat, and cigarette. His belt is black. Bonnie drinks Geoff in and is immediately bedazzled even though she is warned by Geoff’s pal, The Kid (played by Thomas Mitchell, the oldest pilot in the group), that “he is a good guy for gals to stay away from.” But Joe’s death closes off Geoff and his staff of pilots to her. Their stoic acceptance of Joe’s death enrages Bonnie, but she begins to accept the masculine moral code of the group proving her worth and becoming the girly part of the mélange. Enter Bat MacPherson (Richard Barthelmess) and his luscious wife Judy (Rita Hayworth, in a star-making role). He’s a pilot stigmatized as a coward who must also prove himself to the group.

Hawks’ insouciant attitude is reflected in his eye-line compositions, emphasizing the group interconnection and relationships. Close-ups appear only to make plot or character points. Otherwise the framing is like an overflowing group panel painting – Botticelli’s Allegory of the Rain Forest.

And behind it all, the glue that holds a Hawks group together is the emphasis on professionalism. Emotionalism takes a back seat to being good at your job and using your skills for the people you work with, no matter if the job itself is suicidal and hopeless. Individualism can get you killed and it is only the group that matters. Only Angels Have Wings is replete with dialogue that later appear verbatim in Hawks films from Air Force through El Dorado and encapsulated in Geoff’s remarks: “Joe died flying, didn’t he? That was his job. He just wasn’t good enough.” The ultimate Hawks compliment, delivered by Geoff to Bonnie and later resurfacing in Red River and Rio Bravo is the succinct, “You’ll do.”

Only Angels Have Wings is the Hawks world at its best and most elemental and is a joy to behold. If only an office staff could be like this. 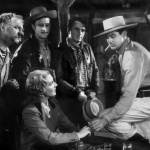 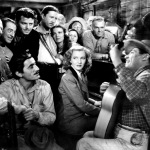 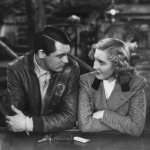