Odd Thomas is based on a novel of 446 pages, and it feels like at least half of them are read aloud in the film. A cramming of expositional and explanatory voiceover is meant to ensure we keep up with the strange story, but it also slows the momentum of what is, at times, a kooky, fun ride. Author Dean Koontz populated his book with dynamic characters, but the film mutes their vibrancy behind stop-and-start pacing. Much of the movie is dedicated to telling us the rules of its supernatural universe and how they tie into what has happened, is happening, or may soon happen. Plot specifics are emphasized a great deal more than the eccentric personalities, a disappointment made worse by an arbitrary final showdown and resolution.

Anton Yelchin plays the titular Odd Thomas, a young man of many talents that include proficiency as a short-order cook and an ability to see and connect with dead people. The former he uses to chop cucumbers with amazing speed (aided by some shoddy CGI) at the local diner, the latter he uses to help solve murders. Police chief Wyatt Porter (Willem Dafoe) is aware of Odd’s gifts and works with him to cover-up any paranormal clues that lead to sudden arrests. Also in on the secret is Odd’s girlfriend Stormy Llewellyn (Addison Timlin), who possesses an impossibly perfect mix of beauty, brains, and nerve.

Decidedly unpleasant are demonic phantoms called bodachs, whose presence predicts tragedy. The snarling specters are descending upon Odd’s quaint town of Pico Mundo en masse, signaling impending doom. Odd investigates a mysterious stranger that has drawn the interest of the bodachs, leading to several clues (along with premonitions and dreamy asides) that need to be put together before unspeakable evil is unleashed.

Director Stephen Sommers, who also penned the adapted screenplay, opts for a kitchen sink approach to the material rather than organized chaos. It starts off well, with Odd’s quirky personality and skills communicated clearly and concisely in the opening scenes. As we’re led deeper into the central mystery, however, the quirkiness just continues to meander rather than percolate. While aiming for an offbeat funny tone similar to The Frighteners or a Scooby-Doo cartoon, Sommers is too concerned with hitting as many points from the book as possible, using quick edits and the omnipresent voiceover to plow through beat after beat. It’s hard to fully surrender to the eccentricity of what you’re seeing when your hand is being held, and yanked, the entire time.

We have a competent guide in Yelchin, a very talented young actor who is fully aware of the type of movie Odd Thomas should be. He imbues the character with a sturdy presence while remaining vulnerable to the madness surrounding him. His Odd is equal parts aw-shucks everyman and tough mystic, equally capable of amiable quippy conversations with Stormy and using a baseball bat to fend off baddies. I even almost believe him when he explains that one of his powers is “randomly wandering around” when he’s looking for someone, knowing that he’ll magically bump into his target. Timlin is adequate as his partner during rapid-fire banter or sappier moments, while Dafoe gets a rare chance to play the straight man to a bizarre foil. Comedy is successfully mined from Odd’s untimely interruptions of Porter, usually as the police chief is attempting to be intimate with his wife.

Ultimately though, any of the charms are lost in tonal fluctuations and a pace that tries for swift, but feels wheezy. The balance of fantastical elements with real world horrors is off – an eerie shrine to infamous serial killers and assassins in tactical gear toting automatic weapons don’t mingle well with comically inept ghosts or cartoonish demons. These issues could be smoothed out if the material were allowed to breathe, but Odd Thomas tries so hard to hit every note that it winds up an out-of-tune jumble. 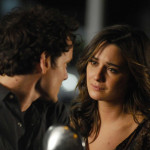 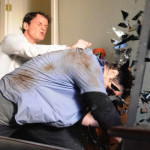 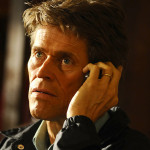