The Nut Job
By: Bill Gibron

Who farted?
Buy It From Amazon
Buy It On DVD
Buy It On Blu-Ray

It’s a shame what happens to The Nut Job by the time the final credits roll. There is so much potential here, so much good work behind the scenes with both the look and character design of the film that you want it to be better. You keep rooting for it to come out of its artistic coma and do something other than sit there like a log gathering more and more unfunny family film moss. As the first animation collaboration between South Korea and the U.S., the movie has a lush, autumnal feel which would play perfectly in September or October. Instead, because of its lax narrative and even more ordinary voice work, it finds itself dumped in the middle of January where only the most desperate of mommies and daddies will drag their wee ones into sure-to-be-empty theaters.

When you’re pitching that already spent flavor of the moment Psy and his overdone hit “Gangnam Style” as a clever pop culture cameo, you know you’re way out of sync with what Disney, Pixar, Dreamworks, Blue Sky, and others are doing. The Nut Job feels like something you’d come across on a child-friendly cable network, all flash and very little finesse. Oh sure, one could appreciate the weird ’50s noir vibe being pushed by Peter Lepeniotis (who worked as an animator on such films as Toy Story 2 and Fantasia 2000) or the desire to parallel the adult and ankle biter storylines, but for the most part, the movie is all pretense and very little payoff. Fart jokes arrive to give the under-aged audience a reason to laugh, but they also highlight a script (by Lepeniotis and Lorne Cameron) that’s sparse in important areas like legitimate wit, characterization, or purpose.

Raccoon (voiced by Liam Neeson) rules over a pretty park in the middle of the fictional city of Oakton. Every year, he places squirrels Andie (Katherine Heigl) and Grayson (Brendan Fraser) in charge of making sure there is enough food to feed everyone during the winter. This year’s take is particularly poor, and the animals face starvation if nothing changes. When rogue outcast Surly (Will Arnett) discovers a street vendor pushing peanuts, he thinks he’s struck the motherlode. When Andie and Grayson interfere with his plans, the wily rodent ends up destroying the entire group’s inventory of comestibles. Exiled to the city, Surly soon learns of an old nut shop loaded with goodies. It’s also the hideout of a recently released mobster (Stephen Lang) and his gang who are hoping to use the location as a means of robbing a nearby bank. Naturally, both the nut and bank job intersect, with hapless hijinx ensuing.

From the bland voice work to the overwrought script, The Nut Job is like a nice first draft. It clearly could have used a healthy dose of the dumbed-down witless wonder that makes films like Madagascar and Ice Age such crummy crowd pleasers. By aiming just above lowbrow, the film fails at every level. It’s not delicious eye candy (the movie looks good, but not eye-popping “Wow, we have to see that again”-epic) nor is it pandering fool’s fodder waiting for a gullible audience to lap it up. Instead, it works so hard at trying to be noble and nice that it ends up feeling bland and boring. Sometimes you just have to entertain, not worry about teaching kids lessons in sharing and self-sacrifice. Even borrowing from your betters (Surly’s pal Buddy is the spitting image of Remy from Ratatouille) is OK, as long as the homage is hilarious.

Instead, The Nut Job feels forced and formulaic, striving to be fun and frisky without the prerequisite joy and wonder. There were so many possibilities here the makers obviously didn’t know which ones to pursue. The end result is likeable, if rather lame. 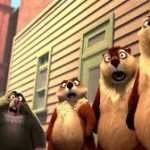 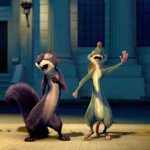 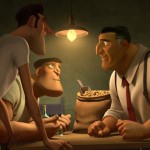