Is this seat... Taken?
Buy It From Amazon
Buy It On DVD
Buy It On Blu-Ray

Non-Stop is yet another in a long line of intriguing film ideas rendered inert by bad execution. In this case, while director Jaume Collet-Serra (House of Wax, Orphan) is doing the best he can to ratchet up the tension and the suspense, a screenplay by John W. Richardson, Chris Roach, and Ryan Engle is spending inordinately large amounts of time trying to sell us on energy-zapping nonsense like backstory and questionable character motivation. We don’t need to know everyone’s personal history. We just want our accidental hero to step up and squash the bad guy. In this case, star Liam Neeson lives up to his Taken tendencies. As for the rest of the film, it’s too invested in the players (and an uncomfortable reason for revenge) to create a clever, edge of your seat entertainment.

Bill Marks (Neeson) is a federal air marshal with issues. He drinks too much and allows lingering family problems to affect his professional efficiency. On a typical overnight flight to London, he runs into several suspicious individuals, including a Muslim doctor (Omar Metwally), a pissed off NYC policeman (Corey Stoll), a goofy nerd (Scoot McNairy), and a nosy-body passenger (Julianne Moore) who is far more curious than our hero likes. Suddenly, Bill receives a text message. The sender promises that if $150 million is not transferred to an account of his or her designation within 20 minutes, someone on the plane will die. Things will continue this way until the demand is met. At first, Bill tries to track the possible suspect. When it turns out that the account number is listed in his name, all eyes turn on the one trying to protect them.

Let’s face it: Non-Stop has an intriguing premise. Someone trying to set up an easily targeted federal agent, a plane full of possible suspects (and victims), and a claustrophobic setting which cannot be breached less something horrific happens. Toss in the high-tech 21st century communication angle and the ever-present War on Terror reality and you’ve got the makings of a (potentially) marvelous movie. So where, exactly, does Non-Stop go wrong? Well, the pacing is problematic. We spend too much time setting up the scenario, the various red herrings, and the possibility that Neeson’s character is indeed behind the plot. We then get a wonderful bit of closed-area fisticuffs (Bill and a possible baddie duke it out in an airplane bathroom) and our first clue about where everything is going.

And then? Well, the script decides that passengers kvetching and looking guilty provides all the nail-biting thrills we need. As Collet-Serra follows Neeson walking up and down the aisles, as his lens looks on as Moore and a frightened stewardess (played by Michelle Dockery) review surveillance footage, you just want the movie to stop treading water and get on with the ass kicking. Who cares who’s behind the scheme? Out him or her, and then get on with the mid-air battling. It seems like, somewhere along the line, Non-Stop goes from being High Stakes on a Plane to some harmless whodunit with ancillary cell phone silliness added in to make everything appear hip and trendy.

Since he’s so good as this kind of cloying claptrap, Neeson manages to shine. Even when saddled with horribly-cliched dialogue about his own inadequacies, he’s very convincing. Collet-Serra even gets a signature shot, as when the plane starts a nose dive to a designated altitude and Bill times his weightless fall to match that of a ready, floating handgun. Everything else is superfluous, especially Moore, who tragically comes across as laughably bad in her “is she or isn’t she” role. A movie like Non-Stop should be so much better than it is. It’s a crowd-pleaser for those with an unnaturally low level of personal amusement. 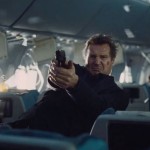 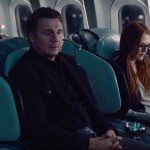 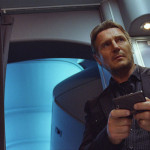