Oh, pa.
Buy It From Amazon
Buy It On DVD
Buy It On Blu-Ray

My Big Fat Greek Wedding was slight but sweet, riding its charm to unprecedented box office success for an indie rom-com. 14 years later, writer/star Nia Vardalos returns to the well in an attempt to mine the same territory for familial hijinks colored by overwhelming Greekness, and the result is an uninspired collection of half-baked ideas thrown together haphazardly.

The sequel includes several subplots that feel like ideas for episodes of My Big Fat Greek Life – the disastrous, short-lived TV show spun off from the original movie, that were either rejected or shelved after the show’s one-season run. The mishmash includes, but is not limited to: overworked parents finding time for a date, a busy mom going from frumpy to fashionable, the elderly family patriarch learning to use a computer to prove distinguished Greek lineage, an otherwise unnecessary secondary character coming out of the closet, and the arrival of a hotshot news anchor and his wife (Greek, of course, played by John Stamos and producer Rita Wilson).

There’s so much mindless chaff to wade through, there’s little time to develop the film’s two main storylines. Not that they’re all that deep, either. Paris (Elena Kampouris), teen daughter of Toula (Vardalos) and Ian (John Corbett) – the bride and groom of the first big, fat wedding – is applying for college. Toula and Ian want her to attend Northwestern so she’ll stay close to their Chicago home; Paris’ heart is set on NYU. And there’s a wedding. Since their marriage license was never signed, Toula’s parents, Gus (Michael Constantine) and Maria (Lainie Kazan), aren’t technically married, so the whole fam gets involved in planning the official nuptials.

Vardalos is likeable as an actress and imbues Toula with relatable, everywoman appeal and personality, but as a writer she’s way too safe with her sitcom sensibilities. The theoretical humor is derived entirely from culture with none of the clash. The first film at least had the dynamic of Anglo Ian being put through the wringer with Toula’s proud Greek family. The sequel relies way too heavily on broad, overstated patriotism and traditions to really dig into the universal, and in this case staid, themes.

Paris wears dark eyeliner, a choker, and a military-style coat to signify some sort of rebellious streak, though run-ins with her helicopter mom are never contentious and are easily rectified with clichéd banter. Toula is supposed to come off as put-upon, but if her daughter flashed even a small percentage of the sass that a real-life teenager displays regularly, her head would explode.

Supporting players show up randomly for a gag or blunt, overwritten lines about “romance being gone after marriage” and the like. From oversharing Aunt Voula (Andrea Martin) to cousin Nick (Louis Mandylor), every family member is some version of the wacky neighbor, which sort of makes sense considering they all live on the same street, but the sameness drains the characters of vibrancy. Their sheer numbers are used often to represent an overbearing, united force. Against what? Stuffy college recruiters and slightly rude neighbors. And in an out-of-nowhere slow motion powerwalk set to “We Are Family.”

The superficial complications are presented plainly by director Kirk Jones, the situational wit and drama never elevated into anything genuine. Grandma (sorry, Yiayia, played by Bess Meisler) punctuates a scene by dancing down the street with lingerie over her orthodox clothing (cue laugh track). Later, she ditches the traditional head scarf to have her hair done-up all pretty (cue the audience “aww” sound effect).

Bland and immediately forgettable, the small, slim takeaway from My Big Fat Greek Wedding 2 seems to be the inevitability of being worn out by family, and learning how to smile through the smothering by remembering you love the lugs. After 90 minutes with these characters we can relate with the worn out part. 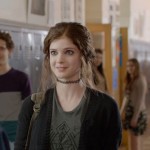 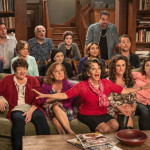 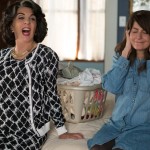