Mute is a baffling film. Its gritty, near-future aesthetic recalls 1982’s Blade Runner, down to giant digital billboards and a scantily clad woman in a clear raincoat.

But its neon-noir plot is nowhere near the same orbit. Streaming on Netflix, Mute follows a genre-familiar setup of a man exploring a city’s seedy underbelly to search for a missing woman. Here, he navigates a Berlin replete with flying cars and stripper robots. But for all of Mute’s visual flair, its characters ring hollow. The protagonist especially feels like a construct of contradictions instead of a real person.

Leo (Alexander Skarsgård) is mute, thanks to a childhood accident with a motorboat. He’s also Amish, which to my knowledge (and 1985’s Witness), makes him unlikely to be on a motorboat in the first place. The Amish eschew electricity, preferring to live a devout and self-sufficient Old World lifestyle.

Leo lives in Berlin, communicating through sign language or writing on a small pad. He wears simple drab clothing but orders takeout by drone, listens to records on a turntable, and tends bar in a nightclub when he’s not carving wooden beads or bedposts.

His waitress girlfriend, Naadirah (German actress Seyneb Saleh), who works at the same club, gives him a cell phone. Leo also drives a car fairly well for someone whose community’s idea of horsepower is a horse and buggy.

Why make him Amish? Why give him some cockamamie accident to explain his disability at all?

Granted, some of this hits close to home for me. My son is disabled, and I’ve advocated for better representation of disabled characters on film.

Director Duncan Jones, who co-wrote the script with Michael Robert Johnson (2009’s Sherlock Holmes), seems to want to juxtapose the antiquated with the advanced, but to no clear purpose. But Leo’s disability doesn’t add texture to the plot, as in The Shape of Water. Instead, Mute shows that the character often disparaged as a “dummy” is the smartest guy on the trail.

The blue-haired Naadirah has a dark secret that, also typical of this genre, involves sex. And money. Before she disappears, she wears a towel from the shower, her jacket, and boots to walk down the street with Leo. What woman does this?

Skarsgård can be sexy or sinister (TV’s True Blood and Big Little Lies, which recently netted him a Golden Globe), but his performance in Mute feels is flat. He’s all sad-eyed stares and brute physicality.

Paul Rudd as Cactus Bill, an AWOL army medic who stitches up a crime boss’s henchmen, fares the best. With his natural affability, he seems to be riffing on his Ant-Man persona as a dad with a checkered past, this time with a horseshoe mustache. Then he spews profanities, asks prostitutes to babysit his daughter, and both threatens and embraces his army buddy (Justin Theroux of TV’s The Leftovers), a pedophiliac orthotist. He’s a live wire.

How and why his path crosses with Leo’s is the film’s mystery. But there’s little suspense throughout its two hours and six minutes.

Jones has been an intriguing sci-fi voice since his 2009 debut, Moon, featuring a tour-de-force performance from Sam Rockwell. His follow-up, 2011’s Source Code, folded a time-twisting plot aboard a speeding train. But his next effort, 2016’s fantasy adventure Warcraft: The Beginning, was a mixed bag, and Mute is certainly a disappointment.

Jones dedicated the film to his late nanny, Marion Skene, and his father, David Jones, aka singer and actor David Bowie (The Man Who Fell to Earth, The Prestige).

Something in this material clearly spoke to Duncan Jones. But whatever that was is lost in translation. 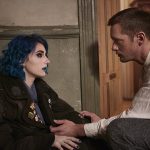 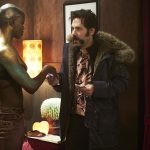 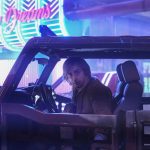