Muppets Most Wanted
By: Bill Gibron

Like the Looney Tunes, and in some cases, the earliest Disney catalog titles, the Muppets were never really meant for the kiddies. Instead, they were expression-filled puppets who took adult material and turned it into sly, slick satire — albeit, dressed in nursery school sentiments. Once Sesame Street came along and the popularity of Jim Henson’s creations skyrocketed, however, aiming content at the underage crowd became mandatory. Even within the far more mature Muppet Show, “family” was the fixation. So it’s easy to dismiss Muppets Most Wanted as catering to all parts of the demo with none given specific concern. On the other hand, this is still some fun stuff, especially when you add in the numerous cameos and caper theme to the movie mix.

Moments after successfully relaunching their “brand” via the first film’s all-star showcase, the Muppets are presented with a major league business opportunity. International “manager” Dominic Badguy (Ricky Gervais) offers the gang a chance to travel around the world and play shows at several major venues. As luck would have it, many of the sites are located right next to banks, museums, and other places flush with cash, jewels, and other expensive objects.

You see, Dominic is actually working with Constantine — the world’s number one criminal mastermind — a green amphibian with a noticeable facial mole who otherwise happens to be a dead ringer for Kermit. His plan is simple — substitute himself for the famed frog and do a bit of larceny while the rest of the Muppets go along their merry way. Naturally, Kermit is kidnapped and sent to Siberia where a no-nonsense Russian Gulag officer (Tina Fey) turns out to be a fan. In the meantime, Constantine is making time with Miss Piggy as well as trying to avoid the detecting eyes of Sam the Eagle and Interpol Inspector Jean Pierre Napoleon (Ty Burrell).

From the moment we see the stand-ins for an oddly absent Jason Segel and Amy Adams, one can tell that Most Wanted won’t repeat the original Muppets reboot’s sense of self-referential fun. Instead, the franchise has been re-launched and it’s now time to see if these characters circa 2014 can stand on their own. Luckily, even with the occasional slightly off voice, they can… and do. The meta nature of the 2011 jumpstart causes this film to feel even more surreal, since the 1981 sequel to the original Muppet Movie was… The Great Muppet Caper. At this rate, our newly refashioned series will be taking Manhattan before leaning on literary classics like A Christmas Carol and Treasure Island.

Following character mythology is one thing, but the whole idea of another intercontinental caper flick feels so strange… and slightly Cars 2. Luckily, this is light years better than that pathetic Pixar misstep. The story may grow repetitive and the jokes a tad stale, but it’s still great to see these classic characters back where they belong — frolicking in front of a camera. The humans all add some welcome heft, but this is really the felt folks’ parade and it’s a joy to behold. Frankly, one grows melancholy at how much they’ve missed these characters and their clever combination of sophistication and slapstick. Few modern kid-vid titles can claim such a creative spark. The Muppets seem to have it in abundance.

Gervais and Fey are excellent, while Burrell gets a lot of mileage out of what is, essentially, a Pink Panther rip-off (he’s no Peter Sellers, that being said) and James Bobin’s direction is, one again, smart and inventive without relying too heavily on non-practical effects. In fact, it’s safe to say that The Muppets Most Wanted is a throwback in the most positive interpretation of that word possible. While the anklebiters will enjoy the colorful shapes and goofy personalities, the adults will dig the high IQ ideas present… just like it used to be a few decades ago. 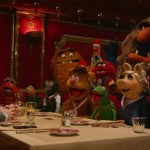 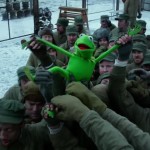 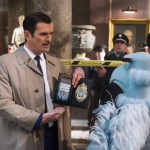