Either of you two holding?
Buy It From Amazon
Buy It On DVD
Buy It On Blu-Ray

A small-town way of life that’s slowly disappearing. A young boy’s coming-of-age set against the possible dissolution of his parents’ marriage. A drifter who inspires both awe and anxiety in the people he influences. A bayou riverbank filled with secrets and struggles. These are the narrative elements writer/director Jeff Nichols works with, and against, in his fascinating follow-up to the equally enigmatic 2011 indie triumph Take Shelter.

In Mud, we are whisked away to an Arkansas area losing its identity. Into this close-knit community comes a formerly favored son, the troubled title character (Matthew McConaughey) with a notorious reputation and a torch for a gal named Juniper (Reese Witherspoon).  His saga becomes the centerpiece of a movie that’s languid in pace and loaded with legitimate local color — perhaps too much.

One day, two teenage boys — Ellis (Tye Sheridan) and Neckbone (Jacob Lofland) — stumble upon Mud. They find him living in an abandoned boat high up in a marshland tree. Eventually, they learn that he’s on the lam from the law, a group of bounty hunters hoping to capture him for a “crime of passion” over in Texas. Mud’s plan is relatively simple. He will  win the boys over, and then have them help him repair the vessel so he can escape. As they work together, Ellis falls under the man’s free-spirit spell. Unfortunately, the child’s own home life is falling apart, his mother (Sarah Paulson) desperate to move off the river while his father (Ray McKinnon) feels his way of life, and his relationship, being threatened.

And then the bad guys show up.

Clearly inspired by Mark Twain and Huckleberry Finn, but with its own unique flavor and feel, Mud may be one of the best examples of Southern Gothic ever committed to film. Nichols, who clearly knows his way around such wounded one-horse dynamics, draws us into this world, making us understand the motivations of his characters. This is especially true of Ellis and Neckbone, who come across as lost little men in a kingdom of backwater couldn’t-care-less. Their days are marked by scavenging, shooting the shit, and thinking about sex. For Ellis, it’s more a question of love than lust, however. His puppy dog affections for a local girl (Bonnie Sturdivant) are all wrapped up in hapless hormonal longings.

In fact, it is emotion that drives the core of this film. Nichols gives Mud a meaningful backstory, one filled with heartache and help from a father figure named Tom Blankenship (an aging Sam Shepard).  We even get a wise Michael Shannon as Neck’s devoted Uncle. The problems come with Mud and his obsession with Juniper. While Witherspoon looks the part of an alluring trailer park catch, she’s virtually non-existent in the film. She’s viewed once in a Piggly Wiggly, has a couple of conversations with the boys, and that’s about it. She never comes across as an appropriate symbol for Mud to risk his life over, and that very well may be the point. But in a movie that is already overstuffed (a good half hour could be shorn from the 130-minute running time), she comes across as pointless and superfluous.

Luckily, McConaughey keeps things together, and along with newcomers Sheridan and Lofland, they make for a compelling rooting interest. Yes, the last act feels sudden and strategically illogical (the villains were following Juniper and the boys, right?) but it has the necessary human catharsis. With its humid, homespun atmosphere, Mud makes a case for its filmmaker’s skill. It’s as satisfying as a sip of sweet tea on a hot Arkansas day. 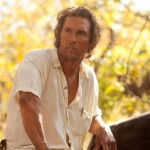 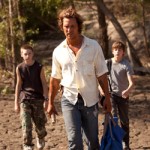 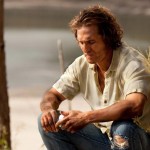