How about another parlay?
Buy It From Amazon
Buy It On DVD
Buy It On Blu-Ray

There are few filmmakers as audacious as Darren Aronofsky. From his black and white break out Pi to his twisted takes on drugs (Requiem for a Dream), immortality (The Fountain), fame fading (The Wrestler) and the blindness of faith (Noah), he is not known for his subtlety or shading. Instead, he makes big bold pronouncements that demand the audience pay heed. If you choose to ignore his artistic adventurousness, you are missing out on one of the great visionaries of our current cinematic stable.

Mother (or as the PR puts it, mother!) will be another contentious addition to his creative canon. On the one hand, it is a master class in tone and menace. Aronofsky understands how to play the audience, and like any great conductor he requires the most from his instrument. If you are willing to go along, you will find yourself immersed in a mystery that’s both terrifying and touching, allegorical and yet still able to work as a solid story. You may not like it, or yourself after it is all over, but you cannot deny the power of what you witnessed.

The plot is hard to discuss without (a) spoiling the experience, and (b) imposing one’s own personal interpretation onto the material. Needless to say, Jennifer Lawrence in the title character, the only name we know her by. She is married to a famed poet (Javier Bardem) who is currently going through a bad patch of writer’s block. She restores homes, and has done a magnificent job with their current residence.

In fact, outside of the creative stall, the couple’s life together seems pretty good—until they arrive. The strangers in question are Ed Harris and Michelle Pfeiffer and when they make the scene, things really start getting strange. Then their sons (Brian and Domhnall Gleeson) join them. And then there’s a pregnancy…

Mother is, if no other thing, a true tour de force. It represents a vision so strong, an aesthetic approach so dense and multi-dimensional that even those who hate it will come away admiring what Aronofsky wants to accomplish. The acting is excellent, the structure insane, and the overall interpretation open ended and beyond intriguing. This will be a movie that is argued over, written about, and contemplated for what it supposedly stands for. Some may call it a modern Biblical parable. Others may say it’s the creative process seen from the outside in. Others will simply dismiss it as incomprehensible and leave it at that.

Like the true master of dream logic, David Lynch, Aronofsky doesn’t care if you get it. It’s the journey, not the destination. As in Noah, when he introduced fallen angels as rock monsters looking to make their path back to Heaven, Mother offers fandom as fear. As loathing. As triumph and destruction. There’s no middle ground, but there’s also no specifics. This is a director who doesn’t hit things on the nose. Instead, he hints and suggests. He keeps things moving at such a fevered pitch that we have a hard time letting things sink in, but when they do–Mother is the very essence of an “AH HA!” movie. One second your lost in symbolism. An hour later the meaning hits you in the head.

Clearly, Darren Aronofsky isn’t making mainstream movie fare. He is making art, and art is exactly what Mother is. It’s difficult and complex. It’s beautiful and grotesque. It’s life and taboo, broken and reconfigured. It will raise your interest and your ire. But it is never boring and always audacious. With Darren Aronofsky, you’d expect nothing more. 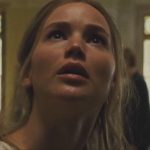 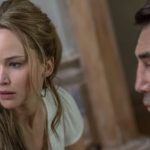 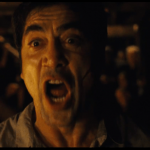 One thought on “mother!”