Come on, even Lecter got air holes.
Buy It From Amazon
Buy It On DVD
Buy It On Blu-Ray

Stories of man playing God to their own detriment are as old as creation and as each generation pushes the limits of technology and scientific morality, fresh takes on the subject remain relevant. Morgan is a rotten, trivial take. It’s a bland, Frankensteined mix of 2009’s Splice and last year’s wonderful Ex Machina, with nothing new to add to the genre at large.

With his feature debut director Luke Scott – son of Ridley, who tackled similar themes with much more profundity over three decades ago – and writer Seth W. Owen have difficulty justifying their creation. Clinically examining the viability of an advanced bioengineered life form, with an unclear purpose, fails to spark interesting debate or build meaningful tension between the group of allegedly smart people overseeing the project. When things turn truly disastrous most of them devolve even further than their initially broad sketches, becoming clichéd horror movie dopes.

The steadiest, to the point of being expressionless, character is Lee Weathers (Kate Mara), a corporate risk management consultant sent to a sprawling, remote estate to check up on her company’s latest product. A recent outburst by Morgan (Anya Taylor-Joy), a five-year-old test tube kid already physically matured to teenager, has left a doctor (Jennifer Jason Leigh in a nothing role) injured and the executives nervous about their merchandise. Morgan was a sense of great pride for her scientific parental units, either as adoptive daughter or breakthrough, and is now locked up in a state-of-the-art glass and concrete lab beneath the decaying country home. Lead scientists (Michelle Yeoh and Toby Jones) are sullen, while behavioral expert Amy (Rose Leslie) is especially worried, having acted as surrogate mother in Morgan’s emotional development.

The converse Stockholm Syndrome is a potentially interesting layer, with the chilly Lee correcting anyone who calls Morgan “she.” As she likes to say, “It’s an it.”  Like everything else in the movie, though, the questions regarding Morgan’s humanity are left superficial and there’s no unique hook to the story.

Morgan’s cabin fever isn’t ever effectively juxtaposed with that of her (its?) observers, which manifests itself in a subtle, awkward exchange between Lee and resident chef Skip (Boyd Holbrook). Mostly, the secondary members of the crew are there to provide exposition and confused/sad reactions when needed. In contrast to Skip’s failed flirtations with Lee is their stilted initial meeting, which exists solely to establish that he owns a rifle. Maybe that will play into the action later.

Lee’s impassive investigation confirms her as a dutiful corporate drone, and Mara’s pursed lips and unwavering intonation make her as interesting as a quarterly sales meeting. As her foil, Taylor-Joy, who was extremely engaging as a conflicted youngster in The Witch, is equally flavorless, with machine-like conversation emerging from underneath a grey hoodie. For all the talk about her, Morgan barely factors into the movie until it’s time for the monster to go berserk and the two main characters hardly interact, leaving the final act dull for more than just it’s uninspired romp through gruesome sci-fi/horror resolutions.

Philosophy is left blunt, with the centerpiece conflict a conversation between Morgan and a company psychologist (Paul Giamatti), whose reckless provocations could be meant to represent the arrogant folly of man, but really it just comes across as clunky writing.

Escalation is never felt, even when things start getting bloody. The action is a means to an obtuse end, with revelations that add little color to film’s central conceit and there’s no reason for us to care about what they mean to the world outside of the lab. With nothing interesting to say about bioengineered beings and a failure to create empathy on either side of the equation, Morgan never springs to life. Even the B-movie mayhem is a slog. 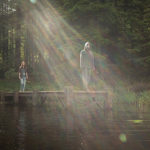 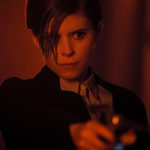 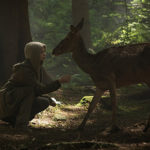