The Monuments Men
By: Bill Gibron

Few will see what George Clooney is trying to do with his latest film, the World War II-themed dramatic comedy The Monuments Men. Fewer still will think he came close to succeeding. By removing almost all the horror from that world-changing conflict and instead focusing on the legacy the United States’ efforts to reclaim lost art stolen by the Nazis, the A-list superstar wants to show that civilization only survives when its least appreciated (but, perhaps, most valuable) elements are given as much import as sovereignty and human life. While entertaining and intriguing, Clooney fails to find the scope necessary to explore this theme. Instead of being epic, The Monuments Men feels minor and trivial.

We meet George Stout (Clooney) as he is advising President Roosevelt on the situation in Europe. With the war dragging to an end, Hitler has assigned his troops with the task of ransacking the great museums, churches, and state houses and taking their priceless paintings and sculptures. Some go to the members of the Fuhrer’s inner circle. Others are planned for a massive Hitler Museum once Germany “wins” the War. With U.S. government approval, Stout recruits a team including Chicago architect Richard Campbell (Bill Murray), sculptor and art expert Walter Garfield (John Goodman), museum director James Granger (Matt Damon), and historian Preston Savitz (Bob Balaban).

Arriving overseas, they team up with a British liaison (Hugh Bonneville), and a Frenchman (Jean Dujardin) desperate to serve his country. Granger is given the task of questioning a suspicious woman (Cate Blanchett) who is unsure of the U.S.’s motives. You see, Russia is moving in from the East, and they aren’t returning the art to its rightful owners. Instead, they are taking it back to the Soviet Union as “compensation” for their losses. When Hitler commands troops to destroy anything left after his death and/or Germany’s defeat, it becomes a race against time to stop the enemy and the greedy Allies from undoing everything Stout and his men are struggling to save.

At first, Clooney’s motives with this movie are hidden under a series of character introductions and ominous portents of the War’s dwindling last days. As Murray cracks wise (usually at Balaban’s expense) and Damon makes doe-eyes at Blanchett, we wonder why we aren’t seeing the brutality of battle so familiar in films like Flag of Our Fathers and Saving Private Ryan. Then Monuments Men takes us to the beach at Normandy… and all we see is the calm and Allied controlled aftermath of that heroic bloodbath.

All throughout this film, the terrors invited upon most of the world by a certain power hungry madman are merely hinted at, not shown. A German-speaking driver hired by Stout as a translator casually mentions his grandfather was sent to Dachau. A raid on one secret site turns up a barrel full of gold teeth. Blanchett has a moment where she describes to Damon about the true cost to Jews in Europe and it is here that Clooney’s purpose becomes clear: while some were sacrificing to save our way of life, others were trying to make sure we had something to come back to. As characters die and the timetable speeds up, the movie becomes a mission to save two important works — the Madonna of Bruges by Michelangelo and the Ghent Altarpiece in Belgium. These goals keep us focused, even as the film finds unnecessary ways to pass the time (a possible romance between Blanchett and Damon goes nowhere).

The Monuments Men made headlines a few months ago when the studio moved the film from a prime Awards Season slot in December to its present release date. Some argued the change was a clear sign that the film was a flop. While it does have its issues, it’s also intriguing. You just have to understand what Clooney was up to before its value emerges. 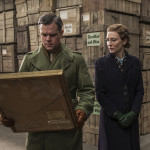 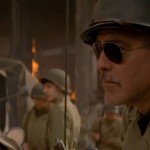 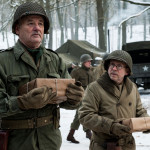 One thought on “The Monuments Men”