Mommy takes place in Canada in a fictional 2015. The only difference between real Canada and this Canada is a new law that has been passed which allows a parent to hand her child over to the care of the government with fewer restrictions. Based on the events of Mommy, the filmmakers would stand in opposition to such a law. One might wonder what the purpose of protesting a fictional law might be? Maybe this reviewer doesn’t know enough about Canadian politics to understand the context. Strike that, I’m sure I don’t. But it’s best not to dwell on that, anyway — Mommy’s story is just as effective with that introduction disregarded.

The Mommy in question is Diane (Ann Dorval) – a 46-year-old widow whose teenage son Steve (Antoine-Olivier Pilon) is released from a secure facility that can’t handle him anymore due to an incident involving violence and arson. She has two choices: commit him to a potentially harmful prison-like facility, or take him home. Had she taken the former, this would have been a very short movie.

Diane and Steve strike up a relationship that had suffered over the years. And we quickly see how difficult Steve can be – he suffers from ADHD, and probably bipolarity and some other mental illnesses. His volatile personality sparks an equal amount of emotional exchanges and violent confrontations. 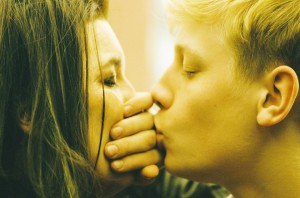 Kyla (Suzanne Clément), a neighbor with a stutter, becomes attached to Steve and his mommy. At first closed off and unable to communicate effectively, her inhibitions and stutter both disappear amidst Diane and Steve’s unconventional, take-it-as-it-comes, take-us-as-we-are lifestyle. With two strong women keeping him in line, Steve settles down for a while. But the good times don’t last much longer than a rose-tinted montage. Steve’s Oedipal tendencies, uncontrollable rage, past transgressions, and manic-depression all manifest, leaving Diane with some tough decisions about her son’s future… with that fictional law just hanging there, tempting her to discard him despite the bond they’ve forged.

Some heavy-handed filmmaking adds more kitsch than punch, including slo-mo sequences inserted to emphasize any even-somewhat-significant emotional moments and a couple of intrusive, overly long montages backed by a corny, ’90s-heavy soundtrack. But despite a few flaws and some predictable plot points, Mommy draws you in and keeps your attention – mostly because of the intimate and visceral portrayals of authentic, spirited characters by all three main actors.

Director Xavier Dolan also does a nice trick with the aspect ratio – keeping a narrow, vertical format through most of the movie, but expanding it to widescreen for key, uplifting sequences. It’s an effective use of an underused tool in the filmmaker’s kit, in this case allowing the audience more open space in the frame to breathe and feel comfortable during happy moments, and conversely adding to the tense, suffocating, claustrophobic sensation of the scenes contained in the more compressed frame.