Let's get some Dole Whips.
Buy It From Amazon
Buy It On DVD
Buy It On Blu-Ray

With its sumptuous Polynesian setting and daring heroine, Moana sets sail on an engaging adventure that ultimately focuses on navigating one’s place in the world.

Disney’s princesses have grown more independent ever since 1989’s The Little Mermaid yearned to be where the people are … and then gave up her voice to set foot on land. The more-recent Merida from 2012’s Brave (a collaboration with Pixar Animation Studios) and Elsa and Anna from 2013’s Frozen charmed audiences by focusing on family bonds, albeit with romantic interests in the background.

Moana is different. She has no love interest, no romance beyond her love of the water, and (mild spoiler?) two living parents. She’s still a princess—an island chieftain’s daughter—but her wanderlust takes hold to honor her ancestors’ rich history and ensure her people’s future.

If that sounds like a lot on her shoulders, she carries it off sprightly thanks to a rewarding mix of song, lush visuals, humor, and heart.

As a toddler, Moana develops a special relationship with the ocean. It gives her a green gemstone that turns out to be the heart of Te Fiti, the mother island. The mischievous demigod Maui literally stole Te Fiti’s heart while she slept, says Moana’s Gramma Tala (Rachel House of Whale Rider), causing darkness to spread throughout the world.

Once that darkness reaches teenage Moana’s idyllic home, killing crops and driving away the fish, there’s only one solution: Find Maui, return the heart, and all will be right again.

Hawaiian native Auli’i Cravalho, in her film debut, brings Moana depth and charisma as she strives to be a good daughter and ruler but yearns to explore. “The line where the sky meets the sea, it calls me,” she confides in the soaring “How Far I’ll Go.” (Louise Bush provides her singing voice. Thank Lin-Manuel Miranda, who created the Broadway smash Hamilton, for the music.)

Former wrestler, action star, and People’s latest “Sexiest Man Alive” Dwayne Johnson adds humor and reluctant support as Maui, complete with a familiar raised eyebrow. Maui can’t believe the ocean would choose, you know, a girl for something so important. (At this, my seven-year-old son gave me the “Oh, no, he didn’t” look.) Maui is a bit full of himself, considering his magical fish hook lifted islands from the water, as in real Maori legend. Youngsters will embrace his braggadocio from the catchy “You’re Welcome.”

Maui’s tattoos, which come to life to act as his conscience, are hand-drawn. The bulk of the film is computer animated, with a vivacious palette and extraordinarily beautiful images: a ghostly stingray gliding under waves, a living volcano, a giant crab encrusted with shiny objects. (Jemaine Clement of TV’s “Flight of the Conchords” voices him with a sprinkle of Ziggy Stardust.)

Co-directors John Musker and Ron Clements (The Little Mermaid, Aladdin, Hercules, and The Princess and the Frog) and screenwriter Jared Bush (Zootopia) pay homage to other adventures, such as Mad Max: Fury Road with a troupe of coconut pirates who travel with their own theme music.

But the lingering, and inspiring, takeaway is how people have as many shades as that magnificent gemstone. Here’s hoping Moana opens the floodgates for more adventures with both girls and boys at the helm.

Blu-ray/DVD extras include a plethora of featurettes and making-of vignettes, plus the theatrical short film “Inner Workings.” Some deleted scenes and a deleted song are included, along with music videos and enough extra ephemera to make any Moana fan swoon. 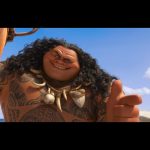 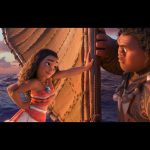 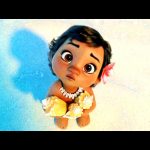