Should have upgraded to Economy Plus!
Buy It From Amazon
Buy It On DVD
Buy It On Blu-Ray

When the history of Tom Cruise’s career is written, the Mission: Impossible movies might end up as nothing more than a footnote. These effective action efforts, using the spy genre and its thriller elements as the foundation for an auteur-based franchise, really isn’t about acting. Sure, it takes a performer with some level of skill to pull off the occasionally ridiculous expositional dumps and techno-babble required, but Cruise is more than capable. Where he really shines is behind the scenes, making sure that each new installment is overseen by a new filmmaker with his own vision for the series.

Thus we’ve had Brian DePalma, John Woo, J.J. Abrams, Brad Bird, and now Christopher McQuarrie as the men making the magic while Cruise handles the hard part. No, doing his own stunts is a given for the 53-year-old. Watching him hang off the side of an airplane on ascent (which happens before the credits, FYI) is no different than him hanging off a building in Dubai, or dangling from a parking garage in Japan. No, where Cruise works his particular prestidigitation is in the publicity department. No one shills like the international superstar, even when he has a product that’s not up to par.

Luckily, Rogue Nation is good. Really good. The story may be a bit scrambled, but the end result is a series of spectacular set pieces that move us to the edge of our seat and then well beyond. As he did with Jack Reacher, McQuarrie shows a knack for such cinematic histrionics. What he also does is write a solid script. Previous installments may have done a solid job of bringing Ethan Hunt’s inner turmoil to the fore, but Rogue Nation really nails it. Add in the excellent work from a cast that includes Simon Pegg (as tech wiz Benji), Jeremy Renner (as agency insider William Brandt), a returning Ving Rhames (as Hunt’s computer geek pal on the outside), and Alec Baldwin (as a CIA director with a vendetta) and you’ve got a can’t miss summer movie event.

The narrative sets ups an officially disbanded IMF — Impossible Mission Force — going up against something called The Syndicate and their leader, Solomon Lane (Sean Harris). Imagine all the ex-agents of the world getting together and playing terrorist and you get the idea. They’re going to do bad. Hunt is going to stop them. Along the way, our picks up a female equal, an agent named Ilsa Faust and as played by Rebecca Ferguson, she’s Rogue Nation‘s secret weapon. Her character, perhaps best described as a classic femme fatale meshed with a modern female action star and a possible double agent is fascinating to watch, and McQuarrie lets Ferguson soar. She almost steals the film from Cruise and his compatriots.

So do the main set pieces. A sequence in an opera house channels Hitchcock and The Man Who Knew Too Much, while an underwater mission will have you holding your breath right along with Ethan. There’s even a showdown in Morocco and Cruise once again proves that, age and safety issues be damned, no one is going to see a motorcycle chase stunt happen without his face attached to it. He’s there for every nail-biting, goosebump-producing jaw dropper. It’s what we’ve come to expect from the icon, a way for him to channel much of the negative blowback from his surreal celebrity into a “dude sure is brave” belief.

If you are ranking these Missions, Rogue Nation comes right after Ghost Protocol. All make the modern shaky-cam idea of action look like the limp fad gadget that it is. Cruise is more than competent, but as mentioned before, he’s done better, more meaningful work elsewhere. This franchise is really nothing more than his attempt to stay relevant in a medium which has passed such previous action heroes as Arnold Schwarzenegger by. Until he’s too old to make them, Cruise will continue to add Missions to his commercial cache. If they’re as fun and entertaining as Rogue Nation, no one should complain. 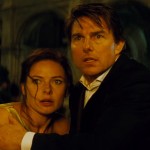 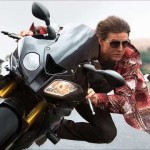 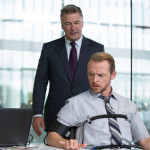