That's Sloane. Miss Sloane.
Buy It From Amazon
Buy It On DVD
Buy It On Blu-Ray

Smart, focused, and ruthless Washington lobbyist Elizabeth Sloane believes her only duty is to the cause. That cause is winning – helping to pass or kill a piece of legislation – regardless of what side she’s on. No shady strategy or dirty trick is out of bounds. It’s no coincidence we’re shown early on in Miss Sloane that she resides in the Watergate complex.

The bureaucratic chess game at the heart of the film is a compelling contest where moral ambiguity sparks contemplation about ends justifying means, the duplicity of the D.C. machine, and the roles of the power-brokers who operate it. Confident performances captured by director John Madden’s swirling, penetrating lens drive the suspense, along with the ominous score from Max Richter. That tension is unraveled a bit by an imitative script, with final act developments that feel more like hasty conclusions to a trashy TV series than the polish on a taught political thriller.

Sloane (Jessica Chastain, expertly conveying the right mixture of fire and ice) works at a powerful firm that’s approached by the gun lobby to kill a firearm regulations bill. Lured by a challenge and the recruiting pitch of Rodolfo Schmidt (Mark Strong), leader of the small firm fighting for the bill’s passage, she switches sides. We know something must’ve gone wrong because a flash-forward opening shows Sloane prepping to plead the fifth at a congressional hearing. Backstabbing and backroom dealing catch us up to that point.

From the super-lobbyist’s frosty direct address to the camera in the first scene, to her brow-beating of opponents and colleagues alike, the posturing often feels like a mechanical study of Sorkin without the sizzle. First-time screenwriter Jonathan Perera somehow makes discussions about the importing of Indonesian palm oil interesting, but the script is often overwritten to the point of transparency.

Sloane’s addiction to uppers and liaisons with an escort to efficiently satisfy sexual needs feel beneath the character and the performance of the actress playing her. It’s not enough for her to be a powerful woman, she also has to be somewhat manic. Chastain is able to reveal more about her character in clever, cold descriptions of how to properly lobby and facts about officials and voters – like the clinical description of how long it takes the public to “get over” a mass shooting – than in the more lurid moments.

Successes also come in the form of great supporting characters and actors who give them dimension. Strong is just as good here playing a straight man as he is his usual tough guy. Allison Pill as an ally turned adversary, Gugu Mbatha-Raw as Sloane’s new right hand/puppet, and John Lithgow as a senator overseeing the hearing are all strong without being showy. Sam Waterston adds his typical level of gravitas, though his presence reminds us of some of the more Law & Order-esque elements of the story. Michael Stuhlbarg is a bit underutilized as Sloane’s chief foe; a heated made-for-cable-news debate between the two is a definite dramatic highlight.

For two-thirds of the movie, the cast capably drags us though the dark side of governance, but then plotting takes precedence over characters and moralizing. Questions about motivations and means get lost in a few perfectly-timed contrivances and double-crosses.

Madden, thankfully, keeps the exposé muted. There’s no fetishizing of landmarks and no overt governmental grandstanding. Instead, there’s a laser-focus on the cold conference rooms and dignitary flesh-pressing where things really get done. It rings true that within all the dizzying wheeling and dealing, a serious, timely hot-button issue gets lost for the sake of political victory. Despite some difficulties resolving the conspiracy, Miss Sloane’s cynicism fits. 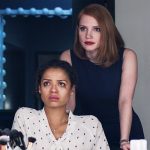 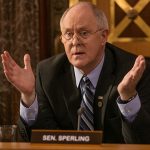 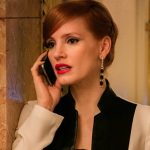 One thought on “Miss Sloane”