Me & Earl & The Dying Girl
By: Bill Gibron

Looks pretty healthy to me.
Buy It From Amazon
Buy It On DVD
Buy It On Blu-Ray
Buy The Book

Most filmmakers claim to avoid genre contrivance. Their movie isn’t your “typical” tearjerker or action romp. Instead, they argue for such words as “revisionist” and “reinvention” and think the audience will believe their carnival barker pronouncements. Of course, in the end, we see Rambo in every remade hero, Love Story in every tale of unrequited affection altered by terminal illness.

So one imagines Alfonso Gomez-Rejon arguing that his Sundance winner Me & Earl & the Dying Girl is miles away from mainstream weepers like If I Stay and The Fault in Our Stars, and on the surface, that might be true. But after it does away with all the quirks and contrivances, what we wind up with is a five-hanky workout as imagined by John Hughes’ film geek cousin.

Set up as a clever coming-of-age, we meet our two main protagonists — Me, otherwise known as Greg (Thomas Mann), and Earl (Ronald Cyler II) — as they are hanging out at school, watching classic movies on their computer and remaking them into cloying stop-motion comedies (My Dinner with Andre The Giant). They are the 21st century example of the classic film nerd — obsessed with what they can’t yet do, mocking that which they hope will carry them through their life and career.

Into Greg’s life walks “the Dying Girl,” a classmate who he hasn’t spoken to in years. Rachel (an excellent Olivia Cooke) has leukemia. Egged on by his doting mother (Connie Britton), Greg reluctantly befriends her. More or less confined to her room, Greg and Rachel become close, leading to the kind of conflicts you expect from this kind of movie. But because Gomez-Rejon is too meta in his referencing, and the script by Jesse Andrews (based on his book) is so smug in its desire to film-school you, we end up with an Ouroboros like experience — a tragic comedy that eats itself out of existence.

If you took Scream, smashed it into those generic disease-of-the-week movies that used to pop up regularly on ’70s TV, sprinkled it all with some manic movie pixie dust, and drowned it in a bunch of “aren’t we clever” neo-teen cliches, you have some idea of what makes Me & Earl & The Dying Girl so special, and so smarmy. It’s self-congratulating cinema at its most fun, and most frustrating. By attempting to thwart the obvious by overly embracing it, Gomez-Rejon and Andrews create a storytelling shell game that will fool those with only a working knowledge of Truffaut and Hitchcock, but will annoy anyone invested in such known names.

It’s the movie equivalent of a Matryoshka doll, layer upon layer pulled back to reveal a patented predictability that comes with the setup and Rachel’s diagnosis. Unless we go pseudo sci-fi and find a miracle cure, we are traveling down a wholly familiar path where the players are destined to disassemble, only to finally come back together as the proto adults they’re going to be. While YA in spirit and purpose, Gomez-Rejon and Andrews believe they are cooler than that, and never let the viewer forget it. The film is often very funny, but it’s also false. There are no real world equivalences here. This is a film world, about a filmed world, where the filmers find film to be the answer to their film-based beliefs.

Its crowd-pleaser status is easy to understand, since the creators are copping to everything the modern movie buff holds dear. But the reach to someone more mainstream is questionable. Audiences who fall for such manipulated sadness will look wall-eyed at the numerous Criterion callouts, and hipsters who hold onto their steel box reissues of Italian splatter fests will scoff at the attempts at emotion. In fact, it’s safe to say that Me & Earl & The Dying Girl is a film full of attempts. When it succeeds, we smile. When it doesn’t, we sense a revision gone wrong, or at the very least, unoriginal. 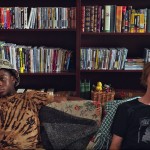 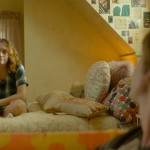 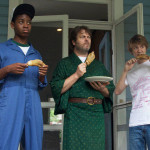