Master of the Universe
By: Paul Brenner

"Next June we invade Moscow."
Buy It From Amazon
Buy It On DVD

In a chilling and prescient moment in Network, a corporate board chairman lectures a television anchorman about the new world order: “There are no Arabs. There are no third worlds. There is no West. There is only one holistic system of systems, one vast and immane, interwoven, interacting, multivariate, multinational dominion of dollars. Petro-dollars, electro-dollars, multi-dollars, reichmarks, rins, rubles, pounds, and shekels. It is the international system of currency which determines the totality of life on this planet. . . . There is no America. There is no democracy. There is only IBM, and ITT, and AT&T, and DuPont, Dow, Union Carbide, and Exxon.” Network was made in 1976 and almost forty years later this speech has become the way of the world.

In Marc Bauder’s equally chilling Master of the Universe, Bauder takes a contemplative journey inside the world that international finance has now become (a nightmare construct of Paddy Chayefsky’s 1976 rant) as seen through the eyes of global investment banker Rainer Voss.

Voss is an indescript functionary, a banal presence and yet a man who had billions of dollars and the fate of entire countries in his hands. It is not for nothing that Bauder has more than a passing resemblance to Adolf Eichmann. Voss’s glass booth, however, is the barren, glass-encased office floor that Voss lurks around, occasionally drawing financial formulas on the glass walls, his numbers floating into space in front of the other financial towers outside his window in Frankfurt.

Bauder’s camera traps Voss in its documentary lens as the man details in an extended monologue his life in the world of international high finance. It is a world that Voss looks back on (it is not clear whether Voss just gave up the financial world or he was cast adrift) with melancholy and cynicism. Voss creates the inner temper of the kind of person draw to that world.

It is not a world of crazed individual achievement like the glorified individualists in The Wolf of Wall Street and Wall Street. Working for an international financial giant is a celibate world, a monastery of finance, where there is no life outside of the corporation: “Absolute loyalty to the organization. Basically you have to be willing to give up your life.” Later, Voss points out, loyalty to the organization leads to a disconnection to social processes, “It is a closed system that leads you further away from reality. You don’t need the outside world anymore.”

It is this sedate world of abstraction, a world of municipal swaps, options, financial innovations, and deregulations (begun in 1986 with Reagan and Thatcher), that created the cold draconian climate that led to the financial collapse of 2008 and, like Reagan’s economics, has now trickled down to the workaday world of schlubs like you and I. A world of heartless pay cuts, lay offs, and axing of benefits, where loyalty to a company and company loyalty to an employee is dead and buried. In place of all that is a climate of fear, which Voss points out is “a management tool to put pressure on people.” Voss’s world is the stark and bleak world that we all now live in.

Bauder intersperses Voss’s sermon with the landscape of a barren city – empty streets, parking garages, offices – as if a neutron bomb had exploded and only the buildings survived the blast.

This is a world without individual villains (Madoff, Lay). It is a world where the corporate culture is the plain-as-day evil. As Voss points out, “It has to do with the system. Most people overrate the trader’s role in the banking system.” Voss is not hopeful; the complexity of the financial interrelationships is too intertwined, so much so that no one understands what is going on anymore.

But I for one am heading to the barricades. Remember the Fifth of November! 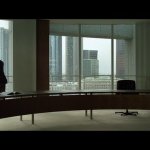 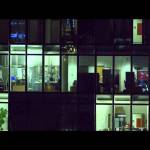 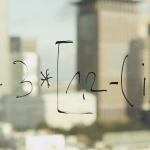