I'll allow it.
Buy It From Amazon
Buy It On DVD
Buy It On Blu-Ray

They say that if you find the right moment, the circumstance or the situation that set the tone for their entire life, you can learn a lot about a person. You don’t have to have all the details, no need to follow them from cradle all the way up until the grave. No, just concentrate on this one incident and you will have all the insight you need.

Sadly, for the makers of most biopics, that’s advise unheeded. Instead, while trying to explain why their subject deserves such a cinematic treatment, they try to cover everything, and in the process, prove nothing. A narrower focus gives us a chance to really know someone, to see how their past presents itself now, as well as how their future might play out based on what we know today.

So, naturally, you’d think that an overview of Thurgood Marshall, the noted Supreme Court Justice appointed by President Lyndon B. Johnson and the first African American to ever hold such a position, would center on that moment in 1967 when word came down that he would be making history. Instead, in Marshall, we backpedal two decades to when the great man was an idealistic young lawyer, battling racism and institutional prejudice as he traveled from courtroom to courtroom. In doing so, we learn much more about the man than his myth would indicate.

We first meet Marshall (an engaging Chadwick Boseman) as chief counsel for the NAACP. He’s made a name for himself–and not a very popular one–by only taking on those cases where he believes the defendant “of color” is innocent. When the case of Joseph Spell (Sterling K. Brown) comes to his attention, he initially refuses it. Seems he’s not sure about this particular man’s story. He was the chauffeur to a rich white woman named Eleanor Strubing (a fine Kate Hudson), but now he stands accused of raping and trying to kill her.

Complicating matters, Marshall cannot walk into this particular case and represent Spell. Instead, state law and a single minded Judge (James Cromwell) demands that a local attorney take the lead. Though he has no experience in criminal law, Sam Friedman (Josh Gad) becomes Marshall’s co-counsel. Adding insult to injury, the court will only allow the white man to speak. Marshall is not allowed to open his mouth to defend Spell. And before you go and think we are dealing with the Jim Crow South here, these events played out in the North–Bridgeport, Connecticut to be exact.

Thus we have the first of many surprises that come from this arresting, engaging story Marshall tells. There are many themes at play here, more than we would get if we were to merely focus on Marshall’s rise to the nation’s highest court. Would his tackling of the landmark Brown vs. The Board of Education have been a better centerpiece of all the legal wrangling? Probably not. In the Spell case, we have hints of To Kill A Mockingbird, as well as the inherent antisemitism that Gad’s Friedman faced and each offers unique insights.

We are clearly dealing with a country that wants all minorities kept in their place, responding with abject vitriol at any notion of equality or–dare it be said–superiority. Boseman makes Marshall a complex conundrum, a champion for his people who has his own strained standards over what he will and will not be part of. The idea of only taking cases of innocence highlights Marshall’s ego, as well as his own internal vulnerabilities. Gad is also excellent at showcasing Friedman’s fear, and his acceptance of Marshall. Their partnership tells us more about each man than a routine retelling of events. Marshall is a unique biopic in that regard. It’s approach is one that more biographical moviemakers should adopt. 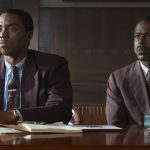 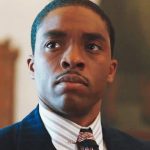 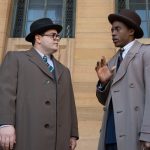