These pretzels are making me thirsty!
Buy It From Amazon
Buy It On DVD
Buy It On Blu-Ray

Maniac isn’t an easy film to watch, and is commendable because of it. Cutting deeper than the brutal slasher violence on the surface – which, make no mistake, the film has in spades – it offers a disturbingly visceral experience by putting the viewer in the skin of a psychopath. Seen almost entirely through the eyes or inside the mind of a severely disturbed individual, there’s a hypnotic, almost passive impression of the inhuman happenings that is at once artistic and alarming.

Producer and co-writer Alexandre Aja has a solid track record of updating cult horror favorites for a modern audience, directing the effective The Hills Have Eyes and Piranha remakes, but at first glance William Lustig’s 1980 version of Maniac doesn’t seem like a prime candidate for reimagining.  The original takes place in a grimy New York City underworld that has been washed clean over the past few decades, the film remaining an ultraviolent, cruel time capsule of a lost era.

Rising to the challenge, Aja and director Franck Khalfoun successfully transplant the core story of a loner with Norman Bates-ish mommy issues to the streets of Los Angeles, where an endless sea of concrete is tinted by a nauseating fluorescent glow. They also substitute the greasy brute of the original, played by­ Joe Spinell, with baby-faced Elijah Wood, playing as far away from type as possible – miles further even than his cartoonish killer in Sin City. The location, performer, and point of view technique make this version feel more timeless; this could conceivably be happening to anyone anywhere at any time.

Wood is Frank, who by day is holed up in his mannequin shop/home and by night stalks the streets and trolls dating sites looking for young women to kill, scalp, and then use the tresses to decorate his static figurine companions. Flashbacks show Frank’s psychotic behavior is a catharsis to deal with the exhibitionism of his prostitute mother.

One day Frank meets photographer Anna (Nora Arnezeder), who admires his (normal, non-human-scalp-adorned) mannequins and wants to use them for an art installation. The pair engages in a nearly ordinary friendship at first, Anna feeling comfortable with Frank’s passive nature and wanting to crack his façade. Frank views Anna as a stable force on which to hinge his hopes of purging the murderous desires that lurk within him. A sort of co-dependency that is bound to end badly.

Capitalizing on Wood’s image and look, Maniac portrays Frank as more than a robotic woman-killing machine. He’s a tragic, wounded soul that garners a sense of understanding, if not quite sympathy. Nearly exclusively shown in reflections, the audience sees Frank as he sees himself, full of doubt and worry that emanates from Wood’s blank, yearning gazes. There comes a point when you may notice mirrors and reflective surfaces being forced into the frame, but it’s never enough to remove meaning from the moment.

Substance always accompanies the style. There’s no pretention in Frank and Anna taking in a screening of The Cabinet of Dr. Caligari or one of the killer’s doomed encounters being scored to Q Lazzarus’ “Goodbye Horses,” forever tied to Buffalo Bill’s dance in 1991’s The Silence of the Lambs. These and other flourishes are used to provide relevant context and aren’t coincidences, posturing, or forced homages. It’s also not a coincidence that Frank is drawn to artistic women – a plucky musician with bright red hair and tattoos, an acrobatic dancer, and, most of all, his potential savior Anna.

The updated version of Maniac is much more than a woman-in-danger film searching to exploit the reputation of its notorious source. Certainly not for the faint of heart, it is bold without being showy, respecting its characters through to an end; however soon their end may come. If you’re able to look beyond, or better, through the brutality, you’ll see a perspective that is honestly disquieting and poignant.

The Blu-ray release of Maniac doesn’t have a crazy amount of extras, only a making of featurette, poster gallery, and theatrical trailer. 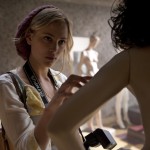 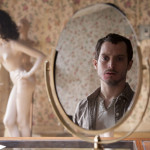 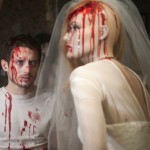 One thought on “Maniac”