We all scream for ice cream.
Buy It From Amazon
Buy It On DVD
Buy It On Blu-Ray

Is there room for overt sentimentality in a scary movie? That’s the main question one encounters after sitting through the Guillermo Del Toro-produced/Andres Muschietti-directed fright film Mama. While the aforementioned Mexican auteur has himself included fantasy and romanticized elements in his own movie macabre (The Devil’s Backbone, Pan’s Labyrinth), it appears his penchant for turning shivers into something saccharine has rubbed off on his protégé. For 90 minutes, Mama is an effective bit of dread. At the end, however, it turns all syrupy.

During the financial crisis of 2008, a distraught father kills his business partner, his ex-wife, and kidnaps his two little girls. Taking them out into the woods, he plans on murdering them as well. Just as he has the gun to their heads, “something” stops him. Fast forward five years and a rescue party discovers Victoria (Megan Charpentier) and Lily (Isabelle Nelisse). They have turned feral and are psychologically lost.

Contacting their uncle Lucas (Nikolaj Coster-Waldau), a psychiatrist named Dr. Dreyfuss (Daniel Kash) believes that the children would benefit from living with a relative and having a “normal” home life. This doesn’t sit well with wannabe rocker Annabel (Jessica Chastain), Lucas’ lover. She doesn’t want kids, and definitely doesn’t want these two. Eventually, our couple learns that Victoria and Lily have brought “something” out of the woods with them, something that is very protective — and very angry.

If ever an otherwise excellent horror film was let down by its unnecessary ending, it’s Mama. Before it goes all soft and squidgy, we’ve experience something both suspenseful and intriguing. The opening provides the necessary amount of imminent danger and the introduction of the Mama character is done with style and suggestion. But just as we are getting used to Chastain’s whining (she really doesn’t want kids) and the random inclusion of the head shrinker’s professional ambitions, the narrative backtracks, giving our spooky specter a backstory worthy of a Dickens novel. By attempting to pull at our heartstrings, Muschietti and company instead pull the rug out from under us.

It’s all Del Toro’s fault — or at the very least, it appears to be. Just like the laughable Don’t Be Afraid of the Dark remake he gave Troy Nixey to tackle, there’s an unsettling desire to turn everything into a dark, depressing fairy tale. Instead of serving up the splatter, or emphasizing the fear, Del Toro seems convinced that sympathizing with our supernatural threat is the best way to wrap things up. In Afraid, it was Katie Holmes who became the substitute guardian for the basement dwelling imps, sacrificing herself to save a little girl. Here’s it’s Mama herself, a “misunderstood” monster if ever there was one. Instead of keeping her mean and miserable, we get teary goodbyes, forced empathy, and a conclusion that countermands everything that came before. It literally ruins the menacing mood and atmosphere Muschietti was vying for.

Still, there’s a lot to like about Mama. For the majority of the movie, we experience a legitimate level of suspense as well as some interesting F/X (Mama herself is magnificent). There’s also a nice interaction between Coster-Waldau, Chastain, and the two young actresses. They come across as a determined family unit. Unfortunately, elements like the wholly unnecessary psychiatrist sidetrack us. Along with the last 10 minutes, it turns things from a triumph to a chore. There’s a great horror movie here. Thanks to some assumed interference within the production, Mama is now merely passable. 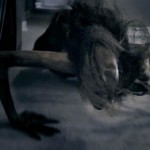 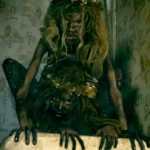 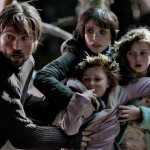 One thought on “Mama”