Do Zombies Dream of Electronic Musclemen?
Buy It From Amazon
Buy It On DVD
Buy It On Blu-Ray

A grieving father expresses a wish to the family concerning his terminally ill teenager – “Let’s enjoy the time we have with her.” But this is not Lorenzo’s Oil and the child is not suffering from ADL. In Maggie, somber father Wade Vogel (Arnold Schwarzenegger) must face the terminal status of his daughter Maggie (Abigail Breslin). But it’s not dying that’s the problem, it’s not dying. Maggie is infected with the “necroambulist” virus, having been bitten by a zombie during a worldwide zombie holocaust. Maggie is now undergoing a zombie transformation that in six to eight weeks will turn her into a full fledged zombie, sacrificing her soul to become a member of the legions of the walking dead.

Maggie is confined to a quarantine ward run by the government, reminiscent of the wards set up to house Ebola patients during the recent real world outbreak of that contagion. Wade is a Midwestern farmer and he drives through the bleak, death-gray farmland to bring his daughter back home to familial hospice care as Maggie undergoes the inevitable transformation. But back home with Maggie, Wade not only has to connect with his zombie daughter but assuage the concerns of Maggie’s stepmother Caroline (Joely Richardson) and young son. Wade also has to fend off the jittery neighborhood cops. And once home, Maggie also seeks resolution from her boyfriend Trent (Bryce Romero), who is also infected with the zombie disease.

Schwarzenegger is a revelation here. Always reinventing himself — from body builder to action movie star to California governor. After getting his sea legs back with his cameo bits in the Expendables franchise, here he is once again transforming himself (not into a zombie) but to a New Age indie actor – the 2015 version of Steve Buscemi. Schwarzenegger is all dour melancholy, quietly downplaying his former bombast – an Ingmar Bergman actor stuck in a horror film. Conjoined with Schwarzenegger in the gloom is Breslin, in what (up until now) is her best role, pulling Maggie forward with the terrors and horrors of her terminal state. Breslin accomplishes what Jeff Goldblum did in Cronenberg’s The Fly, essaying a character transitioning from life to death and accenting that transition is not only all of its tearstained emotions but delving into the very real physicality of the transformation.

The problem with Maggie is that it is too much of too little. First time director Henry Hobson, screenwriter John Scott 3 (that’s his name), and cinematographer Lukas Ettlin emphasize the bleak and ashen post-apocalypse atmosphere, and Hobson directs the scenes in such a de-emphasized way that the fine acting of Schwarzenegger and Breslin get sucked into a black hole of despair. Everything is muted and shaded. Considering the themes raised by the film, some kind of high-keyed emotionalism or expression is needed to justify the goings on. With all the grim stoicism of the characters in this vast, desaturated, and barren countryside, except for the very real physical maladies that Maggie undergoes in the film, one would think every character in the film is already a zombie before Schwarzenegger picks up Breslin.

Maggie is an interesting amalgam of dying-child and zombie film genres — a tearjerker of horror. Who would ever think that the main fault of a zombie movie would be that it is too subtle? 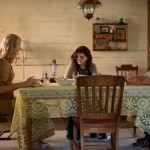 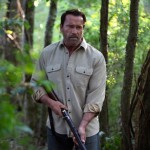 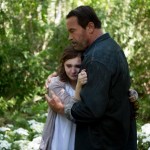