Made in America
By: Mike McGranaghan

Ron Howard would never beat you up in an elevator.
Buy It From Amazon
Buy It On DVD
Buy It On Blu-Ray

The documentary Made in America brings together Oscar-winning director Ron Howard and rap impresario Jay-Z. Stop and think about that collaboration for a second. The sheer unusualness of the pairing brings the promise of something really unexpected and special, doesn’t it? In that sense, the film is a disappointment, though; it’s a straightforward concert doc and not much more. But while it doesn’t make great use of its Opie-meets-Hova potential, the line-up is impressively diverse enough to satisfy music fans.

In 2012, Jay-Z organized the Budweiser Made in America music festival, which was held in Philadelphia, Pennsylvania. The event brought together an eclectic group of performers, including Janelle Monae, Run-DMC, Pearl Jam, Skrillex, and Passion Pit, to name just a few. Of course, Jay-Z himself was the top draw, while narcissist extraordinaire Kayne West made a surprise appearance. Made in America documents the festival by breaking it down into three basic sections. There are performances from the artists, which are almost uniformly electrifying and engaging. There are interviews with the artists, in which they discuss their careers. And finally, there are interviews with the blue collar folks working the festival.

Many of the individual moments are fascinating. Run-DMC’s Joseph “Rev. Run” Simmons recounts the story of how the rappers were brought together with Aerosmith for their breakthrough hit “Walk This Way” — and how he initially didn’t understand the point of the collaboration. Monae, meanwhile, explains that she dresses in black-and-white for her live performances as a nod to her parents, who both worked in the service industry. Other moments are just amusing. The sight of EDM star Skrillex trying to show Ron Howard how to use his DJ equipment is good for a few giggles. Howard shows a curiosity about his subjects as performers, and his easygoing style invites them to open up. No one gets a ton of screen time, but many of them have interesting stories to tell, whether you care for their music or not.

Several of the musicians appearing in Made in America touch on the subject of the financial struggles they endured during their pre-fame years and/or some of the economic issues taking place in the country today. At times, it feels as though the documentary is going to go toward a deeper theme: the unifying power of music coupled with its ability to lift the talented up out of poverty and into a higher socioeconomic class. This idea would certainly make sense, given that Jay-Z famously dealt drugs in a housing project until his rap skills led him to a healthier lifestyle and worldwide fame. The film somewhat frustratingly stops well short of doing that, however. Despite these comments, and occasionally stopping to show workers scraping to get by while working various aspects of the festival, Made in America remains fairly shallow. It never makes clear what separates this particular event from any of the myriad others like it. Whenever someone seems on the verge of saying something especially poignant about going from rags to riches, Howard cuts away to something else.

What Made in America has going for it is the collection of musical performances. If nothing else, it works as a chance to see some of the brightest musical talent on the scene today in action. Pearl Jam bringing down the house. A reunited Run-DMC rocking the mic. Odd Future unleashing their patented brand of weirdness onto the Philly crowd. Jay-Z and Kanye tearing it up. All of these sequences are enticing because these are people who are exceptionally good showmen. They know how to bring the goods live, and Howard’s cameras get right in on the action. One wishes the director would have allowed us to see more songs from start to finish, though. Who cuts off the crazy-energetic Janelle Monae in the middle of a performance?

That and the other minor qualms aside, Made in America is worth a look for music buffs wanting to get a glimpse of some top acts performing live. It doesn’t engage the mind or enlighten you about its subject the way the best concert docs do, but there’s enough great music to keep your feet tapping. 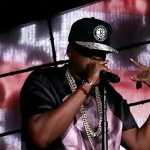 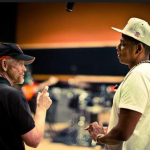 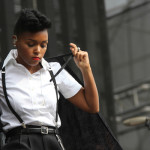