Sideways shoots harder.
Buy It From Amazon
Buy It On DVD
Buy It On Blu-Ray

It has an intriguing premise (albeit one explored back in 2011 with Limitless). It features a fetching female lead (you can’t deny Scarlett Johannson’s beauty, even if she’s being dialed down a bit here). It was written and direction by French action filmmaking machine Luc Besson (who still gets a lot of fanboy love for efforts such as Leon: The Professional and The Fifth Element) and is rumored to be the highest budgeted movie in the man’s fledgling production company’s (EuropaCorp) history.

So why is Lucy so lame? Why is a movie about a mysterious drug that turns people into psycho superheroes so incredibly unsuccessful? Could it be the annoying 15 minute setup which sees Johansson’s title character arguing and whining with her equally aggravating boyfriend? Could it be the robotic monotone the actress applies once Lucy is “infected” with the synthetic version of baby growth something-or-other and is capable of using all 100 percent of her brain capacity? Is it co-star Morgan Freeman’s rampant speculation/exposition or the criminal underuse of Oldboy/I Saw the Devil star Choi Min-Sik?

Maybe it’s just the fact that, as with many interesting ideas, Besson has no clue how to realize his lofty aims. The movie starts out as a typical “innocent girl trapped in a dire situation” thriller, but once it has to come through with the increasing brain power of our heroine, it starts cheating. You see, Lucy (Johansson) becomes an accidental drug mule for Mr. Kang (Choi) and when the funny blue aquarium rocks she’s carrying in her belly start leaking, she begins a quite laughable transformation.

As Professor Norman (Freeman) lectures us step-by-step on what “could” happen should an individual access more of their grey matter, we see Lucy shape-shift (well, at least change her hair color). She then controls matter, levitates baddies, accesses radio waves and cell signals without any technological assistance, and more or less dominates any situation she is in. So much for suspense or intrigue. We never fear that Lucy will be defeated because she has already told us that her ever-changing nervous system will eventually kill her. All we really want to know is what will happen when our lead’s noggin makes it to 100 percent.

The answer is like a weird combination of 2001: A Space Odyssey (complete with an opening sequence set in a prehistoric time), The Matrix, and a National Geographic special. There is more animal sex in this movie than chase scenes. We are supposed to see Lucy’s “evolution” as some manner of amplified natural selection, the constant references to our ancient past and unknowable future a measure of our already limited intellectual capacity. It’s all linked, at the core of our cells, and Lucy is tapping directly into hers while calmly kicking ass.

The story is beyond simple: Lucy is infected, starts changing, and arranges with Paris police to have the other drug mules captured so she can harvest their stashes. While ancillary characters are having an over the top shoot-out, she sits and talks with a bunch of scientists and mainlines the last of the dope. Enter oddball final sequence. From the ads, you’d expect a lot of action, but Besson only sprinkles in a bit here and there. He’s too busy inserting goofy asides and sped-up Danny Boyle-like modern metropolis montages to make some incoherent point about progress.

In fact, this whole movie is a mash-up of various influences and concepts that just don’t come together in a meaningful way. We want Johannson to be enigmatic, not inert, and we need the film to have more at stake than her final “transformation.” Instead, Lucy just goes through the motions, mangling what could have been a hyperactive sci-fi thriller. Talk about brain drain. 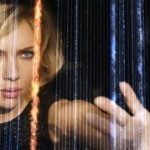 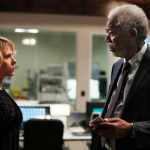 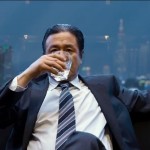