I'm too tired to sparkle.
Buy It From Amazon
Buy It On DVD
Buy It On Blu-Ray

Being undead is exhausting in Only Lovers Left Alive, a deliberately paced, dreamy spin on vampire lore from Jim Jarmusch. Lore, that is, that we identify as vampiric. The fang-toothed imbibers of blood don’t refer to themselves as anything, though they use the derisive term “zombie” to identify the rest of us slaves to crumbling society. Welcome counterprogramming to the young adult craze – which has brought us Twilight and the even more abysmal Vampire Academy – Only Lovers Left Alive is interested in studying its ever-enduring characters rather than placing them a contrived, convoluted plot. Jarmusch captures the day-to-day routine of immortality and the weariness that’s bound to set in after centuries of living.

Light on plot, but heavy on mood, the film introduces us to Adam (Tom Hiddleston) and Eve (Tilda Swinton), a couple with an eternal connection currently living half a world apart. Adam’s in a decrepit home in Detroit that doubles as a music studio where he composes morose music with outmoded equipment. Eve is holed up in Tangier, surrounded by classic literature in her modest home. She even spends time with a classic writer. Christopher Marlowe (yes, the one who authored Doctor Faustus in the 17th century, played here by John Hurt) provides Eve with pure blood for physical nourishment and good conversation for spiritual fulfillment. Rightly sensing that Adam is emotionally adrift, Eve rushes to the Motor City to comfort her beau.

Hiddleston and Swinton are perfectly paired; they’re so good together we almost forget the pretense as they refer to each other as Adam and Eve. They’re both gaunt and sickly looking here and speak with a similar tone, but are able to emote very differently – he’s the sullen one, and she’s the more optimistic yin to his yang. They also find the subtle, dry humor in Jarmusch’s script that prevents the film from being a completely gloomy drag. Imagine the anxiety and logistical problems of booking a flight from Detroit to Tangier that leaves at night and arrives at night, especially when you can’t pack your needed blood meals in your carry-on.

The peculiarities of an unconventional, undying relationship are fascinating to consider in this context. Living forever could certainly be burdensome, and for someone like Adam, who palled around with Lord Byron and composed for Schubert, it’s difficult to find any meaning in the current state of the world. Shutting out society gives him ample time to get lost pondering his lot in everlasting life. He only interacts with a couple of humans, and only out of necessity. Rocker dude Ian (Anton Yelchin) is a guy who can provide Adam with whatever he may need, like rare guitars or even a bullet made from dense wood, and never asks any questions. Jeffrey Wright makes a brief appearance as Dr. Watson (probably not his real name), who supplies Adam with blood.

Disdain isn’t limited to the humans. Eve’s sister Ava (Mia Wasikowska) turns up, and while Eve tries to be accommodating peacekeeper, she and Adam both know it’s only a matter of time before the free-spirited Ava makes trouble for them. Most of us can relate to having a family member we merely tolerate, and Ava is the ultimate unwanted houseguest that stirs up the anger of past conflicts. In this case, ones that fester for literal ages. There’s a great line in which Ava urges Adam to get over something that happened in Paris nearly a century ago.

Jarmusch confidently combines a pensive rumination on the vampire condition – their loves, laments, talents, and many lifetimes worth of superior knowledge – with a sly wit in a soulful film that is also warm and welcoming. Though there’s no questioning Only Lovers Left Alive is grounded in a gritty realism, there’s an otherworldly impression in the shadowy back alleys of Tangier and the decay of Detroit. Occasionally it feels like the dirge is droning on longer than necessary and Jarmusch is over-indulging in the ambiance, but there’s an entrancing method to the melancholy. 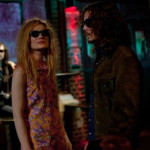 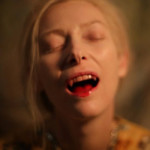 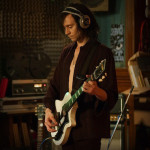 One thought on “Only Lovers Left Alive”