You gonna finish that pie?
Buy It From Amazon
Buy It On DVD
Buy It On Blu-Ray

A well-made but shallow film, Lovelace keeps explorations of its central figure narrow enough to avoid an overload of melodramatic bio-pic beats, but also sidesteps any meaningful examination of the woman behind the title. There’s a familiar journey from unsatisfying home life to troubled adult existence that is so surface-level it feels like there must be more.

Alas, in Lovelace the history surrounding the mania is lacking. There’s no insight into Linda’s feelings on her instant celebrity, only an examination of how her career and life is wrecked by Chuck, who beats her and forces her into acts of prostitution. The debts mount and then it’s all over; the narrative pretty much stopping there as well. In an odd structural choice, we circle back to the time when Chuck and Linda were first married and are shown more concrete evidence of his abuse. As if the filmmakers wish to say, we know you know it was bad, but check out how really, really bad it was. By this point, it’s all just piling on.

There are a couple of flash-forwards in six-year increments, briefly showing Linda as a domesticated mother with a new husband that is never identified, and then as an author appearing on Phil Donahue’s talk show to promote her biography Ordeal, which chronicles her bumpy meteoric rise. There could be some meat to this section of the film, but Lovelace is in a hurry to wrap up and glosses over the most interesting points. The best scene of the film is a phone call from Linda to her father when he tells her he’s seen her film — a genuinely touching moment and really great work from Robert Patrick.

Failing to shine a light on the person behind the tormented existence, Lovelace lacks any true understanding of a woman who went through so much – from being Linda Boreman to Linda Traynor to the mythical Linda Lovelace and then to activist Linda Marchiano. The title fonts, garish wardrobe and uninspired ’70s music choices are there, but none of the spirit.

The Lovelace Blu-ray includes only one extra – a featurette where cast and crew discuss the real-life story and translating it for this film. 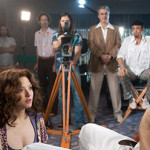 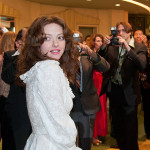 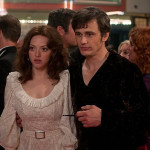