This is the forest primeval but where is Evangeline?

Fifty years ago, Bob Dylan wrote, “Twenty years of schooling and they put you on the day shift.” In Thomas Cailley’s pathetically titled Love at First Fight, a dumbed-down English translation of the more provocative original title, Les Combattants, two surly and lost twenty-somethings live through their last summer before they need to make commitments to adulthood and the proverbial day shift. They spar and growl at each other but they are really in love. Cailley employs a rich Hollywood variety rom-com seasoning to this predictable French confection but the final results are the bland leading the bland.

Arnaud (Kevin Azais) is a blonde-haired, blue-eyed dreamboat of innocence, who, as the film opens, has promised his brother that he will partner with him in the small family-owned carpentry business, keeping it afloat after the death of their father. But Arnaud quickly reconsiders after meeting up with Madeleine (Adele Haenel). He literally falls for her when she knocks him down during a self-defense demo on the beach of their small southern French town. To save face, he bites her and they exchange snarling looks like De Niro and Stallone in Grudge Match. It can only be love. These looks certainly mean something – every time Aranud and Madeleine pause and stare at each other the sky thunders and the rain comes down. And then Arnaud, in one of those whiplash-inducing movie coincidences, encounters Madeleine again when the brothers are contracted to construct a hut by a family’s swimming pool, and Madeleine turns out to be the daughter, swimming laps in the pool. Even when Madeleine proves to be a dark-natured killjoy (she intones things like, “Animals don’t have emotions — if you die your cat will eat your face off after three days”), Arnaud is smitten. So much so that he drops all his plans to help with the carpentry business to follow her to a two-week army-training course. Once in camp, Arnaud and Madeleine begin to shift roles, the tough-natured Madeleine softens up and Arnaud wises up. They go on the lam from the camp and become survivalists in the forest, finally ripe for the inevitable kiss.

There is not much to this wafer-thin romance but whatever is there is mounted impressively. Although Cailley as director is too mannered and deliberate (like a well-staged television mini-series), as screenwriter he keeps the story moving with wit and energy and although this has all been seen before (and will be again) Cailley attacks the project with verve and professionalism. More impressive is the cinematography by David Cailley (the director’s brother), who makes the film look like a million bucks, from the warm, sun-dappled French coast locations to the dark and foreboding country interiors – and especially a sequence involving a raging forest fire and abandoned town that would give Janusz Kaminiski a run for his money.

But the main strength of Love At First Fight is in the two leads. Azais effectively gauges his character’s transformation from macho kid to responsible young man and his original goofiness turn to steadiness under pressure. Adele Haenel dominates the film as Madeleine – her timing is impeccable and when she finally smiles after an hour of scowling and contempt, it is a burst of warming light from the murk. Haenel won a Césare Award as Best Actress for Love at First Fight and the award wasn’t wasted.

But too bad her performance is squandered in this trite little roundelay. 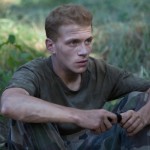 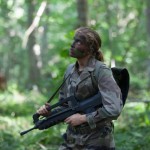 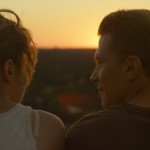