All Is Lost
By: Bill Gibron

The old man and the sea.
Buy It From Amazon
Buy It On DVD
Buy It On Blu-Ray

It’s that face. The undeniably aged but still matinee idol quality face. Argue over his output, his films both in front of or behind the camera, but Robert Redford has been, and will always be, a leading man. He’s also an iconoclast. He represents old Hollywood merged with the radical shifts of the post-modern movement, a man who played by the studio rules until he realized they weren’t creating the product he was interested in. So he started up the Sundance Institute, championed the creative process and independent filmmaking, and carefully cultivated a late in life career full of wise work choices.

Case in point: All is Lost. The second film from Oscar nominated writer/director J. C. Chandor (Margin Call), this man-against-the-elements drama sees Redford as a nameless individual sailing around the world. Somewhere in the middle of the Indian Ocean his sloop hits a half-sunken container from a cargo ship and it springs a leak. Most of his navigation and communication equipment is destroyed or damaged. While trying to patch his vessel, a terrible storm arrives. Soon, our hero is trying everything and anything to stay alive, but survival may be more difficult than even he imagined. With hardly any dialogue and a physicality requiring someone half his 77 years of age, it’s a role made for a man who always took chances, even when he was king of the commercial box office.

Indeed, All is Lost is an excellent example of simplistic storytelling amplified by the director’s choices in both approach and actor. This isn’t some exercise in magic realism, with a Bengal tiger and a carnivorous island as part of the plotting. Instead, we witness one man as he must cope with elements outside his control, and a few within. Redford is clearly playing to his seven plus decades on the planet, showing that his character is not some cinematic superman, able to overcome any and all adversity with a mere flexing of his machismo. This man is tired. He’s spent. He’s out of his league. There are times when he just passes out from the sheer physical and mental exertion required to take on nature all by himself.

Chandor’s script does things both smart and senseless. Redford’s sailor knows a lot, but not how to operate a sextant. Even at his advanced age, his character is carved from a modern world used to cellphones, computers, and other high-tech means of pursuing his passion. Without them, our lead is left having to relearn seamanship, and these sequences argue for an individual whose dream of circumnavigating the globe is more in his mind than his manner. Still, he makes the best of several possibly deadly situations, each time using his wits and weary sense of determination to succeed.

He never conquers, however, and this is where All is Lost draws most of its dramatic strength. We care if our hero survives, and even better, if he finds a way to do so in typical motion picture fashion. But there are no conqueror’s moments here, no glorified genre grandstanding. Each victory that Redford manages is merely a stopgap measure before something else comes along to complicate things. You expect certain survivalist beats — storms, capsizing, sharks, a shortage of supplies — given the material, but to his credit, Chandor chooses to avoid making a major point of out them. They occur naturally, as part of the normal progression in the character’s circumstances.

In the end, when it seems like the title testament will become Redford’s epitaph, we still hope, and this is the other facet this film does very well. No matter how dire the situations become, no matter how many odds are stacked up against him, this is one man who will do everything in his weakening power to persevere. The same is true with Redford. Forty years ago, we’d expect something like this from the unconventional superstar. Now, with All is Lost, he reconfirms his legend without resorting to movie myth. 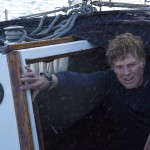 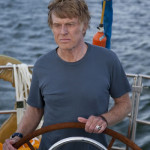 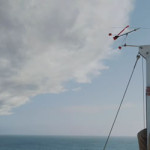 3 thoughts on “All Is Lost”