The Loft
By: Bill Gibron

I'm a suspect, dammit, not a doctor.
Buy It From Amazon
Buy It On DVD
Buy It On Blu-Ray

Imagine Billy Wilder’s The Apartment minus the humor and social commentary merged with Alfred Hitchcock via Danny Boyle a la Shallow Grave without either director’s panache or suspense mastery… and you’ve got The Loft, a lame excuse for a thriller which has been thoroughly defanged and downgraded in this wholly unnecessary U.S. remake. To make matters worse, original Belgian director Erik Van Looy is behind the lens, more or less offering a shot-for-shot remake of his own original a la George Sluizer and his 1988 film The Vanishing. Odder still, this isn’t Van Looy’s first revamp of his material. He was also involved in a 2010 Danish redo.

Clearly, the third time was not the charm. With all this attention paid to his original effort, one imagines that The Loft would be a truly original and flawlessly executed edge of your seat experience. Instead, it’s a boring drone, a series of police interviews interspersed with pointless flashbacks and cloudy character setup. The script by Wesley Strick, whose pedigree includes the excellent remake of Cape Fear, doesn’t seem to understand the basics of the genre here. In order to feel a sense of dread about what’s about to happen, the audience has to have more information than the people onscreen. Here, no one knows anything, resulting in a feeling of disorientation that zaps the film of any and all excitement.

We are introduced to group of five men who share access to a high priced apartment. They use it as a sexual oasis, a place to bring their mistresses, dates, and one night stands. Vincent (Keith Urban) is the one responsible for getting the place, while psychiatrist buddy Chris (James Marsden) is trying to deal with a horrible wife and the coke-addicted Phillip (Matthias Schoenaerts, who was in the original as well as last year’s The Drop). Luke (Wentworth Miller) is a tightly wound wimp who’s jealous of his friend’s conquests, while Marty (Eric Stonestreet) is just a loudmouthed jerk. One day, they discover a dead girl in their place, her body handcuffed to the bed and weird words scrawled in blood on one of the pillows. Naturally, this leads to the police (Kristin Lehman, Robert Wisdom) investigation and a whole stream of red herrings.

In the history of cinematic lacking, The Loft is defiantly deficient. It’s missing a logical narrative, an equally deductive mystery, a real sense of trepidation, an immersive whodunit, and perhaps most importantly, a collection of characters we care about. Instead, this movie maneuvers from one manipulation to another, never stopping to give the audience a moment’s pause. That’s because, when it does try and explain itself, the excuses are as unbelievable as the rest of the plotting. A dead girl in a high rise should be an easy solve. We live in a society obsessed with surveillance, where cell technology provides accidental GPS locations and forensics can find a literal DNA needle in a crime scene haystack. So The Loft has to be smarter than all that. Instead, it’s as dumb as the expressions on many of these unlikable men.

The acting is acceptable, the material requiring little more than a veneer of smug self-congratulation. These dorks don’t even turn on each other properly. Instead, we keep going back over the origins of this situation and see that no one really cares enough to do much except brood. Or pout. How these guys get girls, let alone one stupid enough to spend time in their secret den of iniquity is an “only-in-the-movies” miracle. In fact, the whole film feels dated (granted, it was made a few years ago and then shelved, supposedly), like a 1980s conceit unable to cope with a new millennium and its police science.

For something like The Loft to work, it has to be a lot more intelligent and intriguing than what’s on screen here. What we wind up with is horrible and hackneyed. 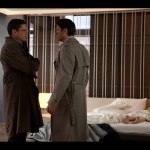 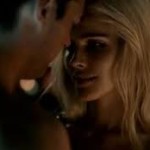 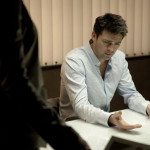 3 thoughts on “The Loft”