The power of Pee Wee compels you!
Buy It From Amazon
Buy It On DVD
Buy It On Blu-Ray

Little Boy is old fashioned Hollywood hokum glazed with a fine sheen of post-modern manipulation. It never earns a single one of its telegraphed five-hanky emotions and is convinced that, once you see what co-writer/director Alejandro Gómez Monteverde and partner Pepe Portillo have to offer, you’ll run to your local Reverend for some of that really ol’ time religion. Flagrantly faith based, it actually seems scared of its “go with God” ideals. Instead, the narrative throws in a celebrity magician, an aging Japanese man, and a contemporary social issue subtext to buffer things for the non-believers.

Our title character is named — believe it or not — Pepper Flynt Busbee (Jakob Salvati, in a fine performance). He’s the smallest seven-year-old in his equally tiny one horse pre-WWII coastal California town and is summarily picked on for his size. While not a dwarf, his doctor (Kevin James) can’t figure out what’s wrong with him. When Pearl Harbor hits, Pepper’s brother London (David Henrie) signs up to serve. When he is declared 4F, their father (Michael Rapaport) is forced to take his place.

This makes their mother (Emily Watson) anxious and Pepper angry. He wants his dad back, and asks his priest (Tom Wilkinson) what he can do to guarantee his safety. He suggests befriending Mr. Hashimoto (Cary-Hiroyuki Tagawa), an aging Japanese man mercilessly picked on by the town bigots, including Pepper’s brother. Eventually, our hero’s love for a famous magician (Ben Chaplin) inspires his efforts to “will” his father home. Enter endless scenes of our pint-sized hero having an aneurysm.

Last year, The Identical walked away with the title of Worst Film of 2014, using its surreal storyline about competing Elvises as a way of arguing for a love of the Gospel over gold records. Yet that insane film filled its awfulness with enough laugh out loud ludicrousness to make the experience a flawed bit of fun. Not Little Boy. There’s no winking at the camera here, no attempt to show that this unhinged fable is in on the joke as well. Instead, Monteverde and Portillo play everything deadly serious, even when we get moments of proposed whimsy (as when Pepper and his Pops “live out” their various imaginary adventures).

We are supposed to get lost in Pepper’s world, to see the hatred and hurt of the war via his interactions with the town, his own intolerant brother, and the budding relationship with Mr. Hashimoto. There’s some dangerous material here (Japanese Internment Camps, the nuclear attacks on Nagasaki and Hiroshima) and yet the film finds ways to reduce each element to a whiny boy’s perplexing POV. We aren’t quite sure what’s wrong with Pepper. Not only is he a bullied “runt” whom no one seems to defend, but he call most of the shots in his family as well. Everything revolves around him. No one has a life outside of what Pepper wants and needs.

And then there are the ancillary characters, most carved out of the Little Rascals playbook. Pepper’s main antagonist is a bulky bit of human suet, while the boy’s father is constantly coming on to Mrs. Busbee. A local man (Ted Levine) who lost his son in Pearl Harbor is so anxious to rid the town of its sole Japanese resident that we don’t know why he hasn’t just up and grabbed a shotgun and killed him. The townfolk are the sort that experience an earthquake (quite common in California) and chalk it up to Pepper’s powers.

In the end, Little Boy seems to argue that fairy tales are fairy tales, whether they are found in a funny book, or in the Good one. It also suggests that all horrors and hardships that come from losing a loved one can be healed over and hidden by commiserating with the “enemy.” Because it’s told with such wide-eyed innocence and earnestness, it’s hard to hate. For those very reasons, it’s easy to dismiss as well. 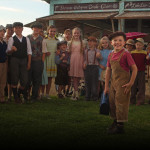 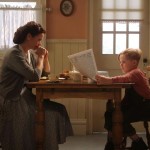 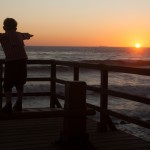