Listen Up Philip
By: Paul Brenner

Meow.
Buy It From Amazon
Buy It On DVD

If you mix into a rancid brew Woody Allen’s 1979 roundelay of self-centered upper middle class New Yorkers, Manhattan, along with Allen’s flirtations with shaky cam in Husbands and Wives and Manhattan Murder Mystery, and add a dash of deadpan Wes Anderson narration from The Royal Tennebaums, you have Alex Ross Perry’s Listen Up Philip served up in a big tarnished bronze spittoon.

The story comes direct from Wonder Boys and Finding Forester: a famous writer befriends a young acolyte and as a result the young man learns valuable life lessons about relationships and art. In Finding Forester, for example, Sean Connery plays a character reminiscent of J. D. Salinger, who imparts his wisdom to a young Rob Brown. In Listen Up Philip, the aging literary icon Ike Zimmerman (Jonathan Pryce) is explicitly based on Philip Roth, and he helps young writer Philip Lewis Friedman (Jason Schwartzman) find his way as a successful writer. But the difference between the films is as vast as the expanse of the universe. In Listen Up Philip, the Philip Roth character does not have a warm and fuzzy center, he is a bastard through and through and the wisdom he reveals to Philip includes aphorisms along the lines of “Don’t make yourself any more miserable than you need to be. Leave that for the women that you love. That’s what they are there for.” But, for that matter, all the characters in Listen Up Philip are unmitigated pieces of shit. Just different degrees of shittiness. Listen Up Philip makes Manhattan look like Love Finds Andy Hardy.

Philip is not an aspiring writer but an already published author with a successful first novel and a second novel in galleys awaiting publication. Philip is also a nasty, obnoxious, self-centered, arrogant, hateful, miserable person, and to Schwartzman’s credit, he goes with it, playing Philip without a net, digging down deep in his soul to discover his inner louse. Not five minutes into the film, you want to kill him. Rushing to meet his ex-girlfriend, she is late for the appointment and Philip tells her off (“You didn’t support me so you don’t get this gift from me. Not ever. Forever.”) and then proceeds to lambast his ex-college roommate, telling him that he wasted his time with him; his ex-roommate retorts by calling Philip “an insufferable Jew bastard” and storms out of a bar in his wheelchair. He then proceeds to work on his current girlfriend of two years, Ashley (Elisabeth Moss), a rising photographer who declares, “I supported you when nobody gave a shit about you. I want you to know I regret that now.”

Ike offers Philip a retreat from the city to stay at his country home. Philip readily accepts. Philip is a diversion for Ike, who has writer’s block and keeps swilling down 25-year-old scotch. Once there, Ike wrangles a job for Philip as an adjunct professor at a local college where Philip gets to insult his students and a new girlfriend, a well-meaning English professor. Meanwhile, Ike clashes with his embittered daughter Melanie (Krysten Ritter).

Perry must be praised for writing a truly acerbic and rancorous script, exposing all the self-centered egomaniacs we come across in real life (we may, in fact, be self-centered egomaniacs ourselves). We all live in our own phony perception of reality and Perry captures that succinctly. Both Philip and Ike rage about all the assholes and snobs they have to deal with, not realizing that they are the people they despise. Ike acknowledges that by citing, “But it’s all relative.”

Unfortunately, the film is ultimately undone by Perry’s shoddy reliance on shaky cam, an ill-conceived camera style that is annoying enough in a Paul Greengrass movie, but doubly annoying here, because it undercuts Perry’s scathing dialogue, obscuring it as the cameraman tries to get a lock on a target for a composition.

Bring back the tripod. It is a good thing. Please believe me! 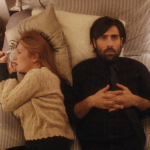 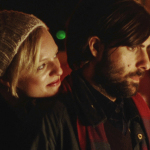 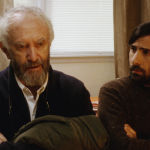