Turns out it is easy being green.
Buy It From Amazon
Buy It On DVD
Buy It On Blu-Ray

Leviathan challenges you to find your bearings from the opening shot. It’s dark, waves are crashing, chains are clanking and coiling, water is splashing the camera, and a team of two is trying to control the chaos. It becomes apparent soon enough we’re aboard some sort of commercial fishing vessel, but the when, where, or why are never provided. The why is up to us; the when and the where quickly become immaterial as more of the striking imagery and ambient sounds prickle the senses. (If you must know, the film was shot off the New England coast, perhaps not coincidentally in the same waters where literary Captain Ahab sought the great white whale.)

Directors Lucien Castaing-Taylor and Verena Paravel, who come from the Sensory Ethnography Lab at Harvard University, thrust us into the center of their documentary experiment in viscera, stripping the art of cinema down to elemental basics.  There are no talking head interviews with the crew — actually no real verbalizing from the crew at all save a few quick exclamations, and no captions apprising us of the time or location, only the freeform orchestral production of the sea and the mechanical beast that is invading it.

Utilizing an array of versatile GoPro cameras, Castaing-Taylor and Paravel take us to nooks and crannies in and around the ship with lingering shots that are engrossing on their own and are even more fantastic and powerful when viewed as one link in a chain of impressions. We’re even tossed overboard into a wash of starfish and other sea life, some of it being violently thrown off course by the trawler’s bow, some of it able to cling to the ship’s underbelly. If you can manage to move along with the cadence of Leviathan, from on deck into the water, and up to follow the seagulls in the sky, sensations move from divine to devastating.

Birds soaring over and diving beside the ship showcase the majesty of flight, but their reason for circling is a feast of gory discarded fish parts. One scene features an injured gull trying to navigate over a crate on deck. It’s oddly hypnotic and tense waiting for a resolution, and I also began to wonder what this bird’s fate would be if the ship wasn’t there.

There isn’t an overwhelming sense of politicizing or pushing of a viewpoint on commercial fishing practices, though every moment is unflinching in its gaze. Stingrays are unceremoniously mutilated, their undesirable parts pushed back into the sea. Dying fish flop and splash, often with bulging eyes in a fixed stare directly at the camera. One memorable shot shows blood-tinted refuse being washed off the ship as if to further taint the sea that is being ravaged for its spoils. Credits at the end of the film list the scientific names of the species shown, putting them as equal partners in this ecological undertaking.

Crewmen aren’t shown as savage beasts, but mere cogs driving the engine of the industrial machine. Close-ups of sweat on brows, water dripping from slickers, cigarettes dangling from mouths, and shoulder tattoos are severe representations, portraying the strict unforgiving nature of their work. Humans aren’t there to create or drive the drama; they’re embedded in it as a matter of necessity. When one of them watches Deadliest Catch – the popular reality TV show depicting the trials of working on a crab boat – he falls asleep.

Some may call Leviathan boring, while others may find it upsetting.  The matter-of-fact, monotonous, and repetitive focus on an unpleasant, dirty job for 87 minutes is a thorny undertaking. At one point we spy a crewman taking a shower and we’re envious he’s given the opportunity to at least temporarily wash off the stink. But I would also say the fact Leviathan makes us feel unclean is proof of the film’s success.

The Blu-ray of Leviathan features an unbroken half-hour scene in the ship’s galley observing fishermen on their downtime, a theatrical trailer, and booklet with an essay from French critic Cyril Neyrat. 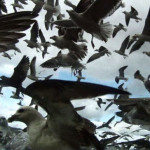 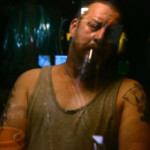 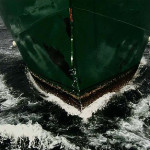 One thought on “Leviathan”