Are you there, God? It's me, Anne.
Buy It From Amazon
Buy It On DVD
Buy It On Blu-Ray
Buy The Soundtrack
Buy The Book

Some stories are so bulletproof that even a tuneless Russell Crowe can’t deliver a mortal wound. There are also some so prone to overwrought pathos that even a fearsomely committed Hugh Jackman and Anne Hathaway, working every creative muscle in their bodies, can’t quite elevate to greatness. In Tom Hooper’s labor-of-love adaptation of the workhorse musical Les Miserables, nearly all of the story’s strongest and most crowd-pleasing elements are passionately brought to the fore. Though it falls short in some departments (notably integrating the comedy with the tragedy), those problems were mostly present in the source material.

Hooper’s take is muscular yet nimble. Though he over-relies on the fish-eye lens to jam the viewer into the performers’ faces (a similarly irritating tic in the less-inventive The King’s Speech), his intent to zero in on the physical immediacy of revolutionary struggle in 1830s France is welcome. In the opening number, a brutalized Jean Valjean (Jackman), imprisoned for stealing bread to feed his family, sings his woe with the other prisoners, his eyes red and hair inexpertly shorn. From there, we follow Valjean’s years-long attempt to start a new life while running from bloodhound cop Javert (Crowe, locked-in and pitch-perfect; as long as he’s not singing).

Meanwhile, Valjean’s trying to raise Cosette (Amanda Seyfried), the daughter of doomed prostitute Fantine (Hathway), and navigate her dangerous romance with aristocratic insurrectionist Marius (Eddie Redmayne, a startlingly powerful singer). There’s a lot to follow, but what can seem ponderous and overdone on stage is given some zip by Hooper’s rollicking direction — he deftly manages the trick of mixing big, crowded scenes with swift editing without resorting to the sugar-rush overkill of a Dreamgirls — and a cast that for the most part sings like their lives depended on it. (The decision to record their performances live instead of lip-syncing and dubbing the vocals in later certainly made for a more visceral experience, particularly Hathaway’s gutsy, all-in performance, which manages to compensate for the stock nature of her character’s tragic arc.)

In the midst of the musical’s yearning melodrama and paper-thin political context, Hooper also has to weave in a pair of gutter-criminals (an elegantly depraved Sacha Baron Cohen and Helena Bonham Carter) who get a real foot-stomper in “Master of the House” but otherwise seem parachuted in, in a crate stamped “COMIC RELIEF.” Any issues over the atonal mismatch of their scenes, though, is more than compensated for by Cohen and Carter’s performances (borrowing liberally from the Annie handbook for hammy musical villains). More potentially damaging is each and every scene where Crowe opens his mouth to sing; you can almost feel his vocal coaches cringe. By the time that the film swells to its teary and bloody crescendo on the Parisian barricades, however, most of these deficiencies will have been forgotten.

Perhaps if there were more movie musicals on tap (the studios still can’t quite trust the genre, and only manage to release one every few years), Les Miserables wouldn’t seem quite as spectacular. But standing as it does, nearly alone, one could certainly do worse than Hooper’s brave and smart addition to the pantheon. 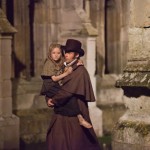 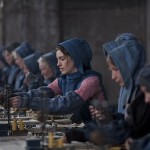 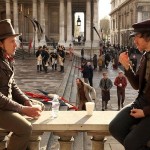