We're...off to cash our paychecks
Buy It From Amazon
Buy The Book

Frank L. Baum’s beloved books about Dorothy Gale and her adventures in the fantastical land of Oz have been in the public domain for decades. Sure, studios like Warner Bros. have confirmed their copyright on films and images (that’s why Sam Raimi had to uncover “new” characters for his Oz the Great and Powerful), but the basic stories have long been available as possible cinematic sources.

So it seems strange that producers would turn to Baum’s great-grandson Roger to realize their aims at a return trip to the Emerald City. His 1989 children’s book has now become the basis for Legends of Oz: Dorothy’s Return, a pathetic family film with middling animation, irritating songs, and no real reason to exist outside an open release date slot at the start of the summer 2014 movie season. Joyless, witless, and even a tad heartless, this kid vid nightmare has low budget lameness written all over it.

Dorothy (voiced by Lea Michele) has just returned to Kansas when she is called back to Oz by her friends the Scarecrow (Dan Aykroyd), the Tin Man (Kelsey Grammer), the Cowardly Lion (Jim Belushi), and Glinda the Good Witch (Bernadette Peters). Seems a new villain named the Jester (Martin Short) is threatening to destroy everything and our heroine must find a way to stop him. Teaming up with a new group of characters including a China princess (Megan Hilty), a wise owl (Oliver Platt), a tugboat (Patrick Stewart), and a soldier made out of candy named Marshall Mallow (Hugh Dancy), she hopes to stop the fiend before he has a chance to realize his wicked aims.

Since the market is so lucrative and the demographic so non-discerning, you can sort-of forgive the makers of Legends of Oz for delivering such a subpar piece of junk. They know parents don’t care what their kids watch and the wee ones are light years away from developing an independent aesthetic about such things. The result is a perfect storm for something this mediocre. In an era where Pixar places a premium on imagination and flawless storytelling and Disney dishes out billion dollar mini-musicals with CG ease, something like Legends is just laughable. It barely stands up to an Ice Age/Madagascar level of scrutiny and at least those franchises have a slick, high tech look about their animation.

Here, directors Will Finn and Dan St. Pierre team up to try and find a way around their robotic, lifeless renderings. Their answer? Laughless jokes, a rambling plot, and a lack of legitimate magic. When pundits try and figure out why certain animated movies “hit” while others tend to disappoint, it’s invention and wonder that rule the day. If all that was required was cartooning, every pen and ink release would make a mint. No, there has to be some actual enchantment within the entertainment, and Legends of Oz is almost wholly devoid of such charm. Instead, it’s workmanlike and draining, inspiring shoulder shrugs and sighs when it should be creating wide-eye wonder and gasps.

And then there’s the music. While credited to “Academy Award nominee” Bryan Adams, there are actually several composers involved and all of them seem quite capable of churning out the kind of syrupy saccharine pseudo showtunes that came with your standard direct-to-DVD titles circa the 1990s. None of the songs are memorable and the desire to include them reeks of both pandering and story padding. In fact, almost all of Legends of Oz: Dorothy’s Return resembles that kind of cynical cash grab that comes with coat tailing a classic. Seventy-plus years ago, MGM and its musical machine crafted one of the most memorable experiences in the history of movies. It’s a film we still revisit with youthful wonder even today. Legends of Oz will be forgotten shortly after it leaves theaters. Oddly enough, that’s the way it should be. 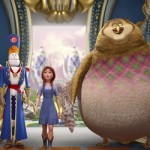 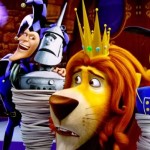 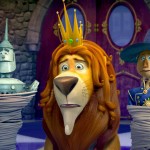 One thought on “Legends of Oz: Dorothy’s Return”