Pose!
Buy It From Amazon
Buy It On DVD
Buy It On Blu-Ray

Most animated films aren’t centered around the human element. Oh sure, they deal with emotions, and feelings, and all of the trials and tribulations that come with being a person, but they usually do so in a far more exaggerated manner. Typically, it’s through anthropomorphized characters: Cars, dogs, sharks, visual representations of a preteen feelings, etc. But every once in a while, actual cartoon humans are the focus. They interact and hopefully create the same kind of magic that they’re living plaything counterparts provide.

Frozen is a good example of placing the people first. Oh sure, there’s a reindeer, and snowman, and a fantastical element (the whole snow queen fairytale facet) but the story of two embattled sisters and the kingdom they are supposed to rule made Disney a billion dollars on the backs of personality and possibility… oh yeah, and some song called “Let It Go.” The new pen and ink feature Leap! tries something similar. It even has a preppy pop song to anchor its forced sentiment.

But unlike that House of Mouse classic, this imported Weinstein Company afterthought is just another example of kid vid callousness hoping to spark and already disappointing and disappearing summer movie season. Instead, the tonal shifts cause aesthetic whiplash, the narrative is generic and hackneyed, and characters come with none of the trappings that make today’s cartoon cash cows such formidable forces at the box office.

The story here is set in the 19th century and focuses on Felicie (voiced by Elle Fanning) who is desperate to be a ballerina. Knowing that she doesn’t have the experience, or the prestige, to get into a renowned Paris dance academy, she steals another girl’s identity and thus the charade begins. She is befriended by a wannabe inventor named Victor (Nat Wolff, replacing Dane DeHaan) who dreams of flying, and former diva Odette (Carlie Rae Jepsen), who will soon act as her mentor. The villains are Régine Le Haut (Kate McKinnon, replacing Julie Khaner) and her horrid ballerina daughter Camille (Maddie Ziegler). Naturally, since this is ballet, The Nutcracker is involved. Oh yeah, and Mel Brooks has a cameo. Go figure.

Do you see the credits above, the ones which mention someone replacing someone else? That’s because Leap! is really Ballerina, a 2016 French made film being repurposed for American consumption, and there apparently was a great deal lost in the translation. Whatever magic and mystery audiences around the world experienced is missing from this movie.

Instead, we are awash in blandness, a lack of legitimate intrigue and invention from a story that seems lifted from cinema 70 years ago. Even the attempted updates don’t work. Granted, Leap! doesn’t go whole hog into a worthless wealth of pop culture references that will be dated before Junior finishes his large soda, but it tries to make some contemporary points and fails on almost every level.

This is another case of micromanaged demographics that end up disappointing all. You can just hear the makings assuring Moms and Dads around the globe that “their tweens” will dig this inspirational story of young people, blessed with little ability but big dreams, going out and pursuing said goals with passion and determination. But Leap! does so in a tired, trite manner.

Children from the previous eras might have cottoned to its easy going gentility, but in a present where everything has to be psychedelic eye candy and revved up 3D action, this movie just can’t compete. It’s not the atrocity we’ve seen from recent animated efforts, but it’s also not very entertaining. It just lays there, waiting for kudos that will never arrive. Some may like what Leap! has to offer. Others will feel unfulfilled and empty inside. 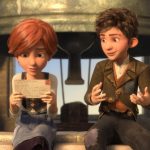 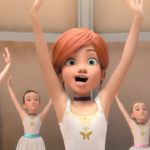 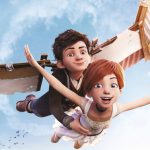