Craps.
Buy It From Amazon
Buy It On DVD
Buy It On Blu-Ray

No doubt there will be countless people that describe Last Vegas as “The Hangover for the AARP crowd,” or something similar. I suppose it’s an easy comparison to make; each film has a group of four guys heading to Las Vegas for a bachelor party. Heck, the weirdest one in each crew even has a big bushy beard. But the similarities end there, and the most glaring difference is that The Hangover was often entertaining and funny. Last Vegas, from its lame title to everything else, is neither of those things.

Cashing checks as the foursome are Michael Douglas, Robert De Niro, Morgan Freeman, and Kevin Kline – playing childhood friends from Brooklyn now in their sixties and scattered around the country. Billy (Douglas) is a successful businessman who never married, but pops the question to a girlfriend half his age while giving a eulogy. Not necessarily funny, but good enough reason to get the old gang together for a guy’s weekend. Archie (Freeman) escapes from the watchful eye of his overprotective son, while Sam (Kline) is more than eager to flee his Florida retirement community. Early scenes showing Sam’s horror at a water aerobics class and his rifling through an acquaintance’s medicine cabinet are standout moments. But it doesn’t take much to stand out from the rest of the substandard sitcom level dreck.

Coasting along as a grating bundle of curmudgeonly energy is De Niro as Paddy, his mood alternating between totally annoyed and moderately annoyed. Paddy lives like a hermit, but agrees to the Vegas trip under false pretenses. He’s not aware Billy is involved at first, the pair having unresolved issues since the death of Paddy’s wife. Nothing about their conflict is emotionally resonant or necessary.

Each member of the quartet is drawn in the broadest of single notes. That can work in comedy if you give your characters something to do, but Last Vegas has them stuck in cycles that further amplify the lack of imagination. Archie lies and avoids calls from his son. Paddy bickers and tosses out barbs. Billy ponders whether he’s doing the right thing. Any potential with the character of Sam is deflated when his wife gives him permission to cheat. This becomes his sole focus and leads to tried and true scenarios that include him hitting on a cross-dresser and having a personal epiphany when given a chance to get lucky with a nubile woman.

Supporting characters fare even worse. Mary Steenburgen’s lounge singer of a certain age exists only to provide Douglas’s Billy with the perspective he needs. Jerry Ferrara has a downright embarrassing turn as an arrogant punk turned lackey to the 60-somethings when led to believe they’re powerful mob figures. He’s tasked with printing and handing out fliers for the group’s big climactic bachelor blowout. Yes, they are in Las Vegas and there is a brutal montage highlighting the passing out of the fliers to attend a party – even Cirque du Soleil gets in on the act in a blatant advertisement for the Aria Resort & Casino. Not that the Sin City setting matters most of the time. Dimly lit lounges, non-descript pool scenes, or a cavernous hotel suite could just as easily be the Harrah’s in Tunica, Mississippi as one of the hottest new spots on the Vegas Strip. Any footage of exteriors looks like recycled tourism board shots.

The scripting from Dan Fogelman and direction of Jon Turteltaub are unbending in their lack of inspiration. Jokes are painfully telegraphed, unfunny, stale, or all of the above. Old guys are shocked at how expensive things are. Old guys get to judge the tamest Vegas bikini contest you could imagine. Last Vegas has a numbing quality to it, going through the necessary motions to just get to the end and not caring to have any fun along the way. That’s also certainly true for the four acting titans in the lead roles, all of whom thinly veil a disdain of the material. They don’t care and neither should we. 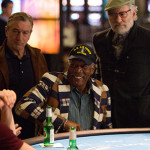 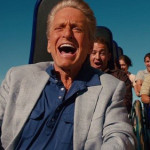 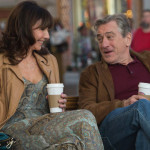