How many times are we having sex?
Buy It From Amazon
Buy It On DVD
Buy It On Blu-Ray

It shouldn’t work. David Mamet’s original play, Sexual Perversity in Chicago, was already reconfigured into a standard Hollywood romcom entitled About Last Night… back in the ’80s and, last time anyone checked, few were voicing a desire to see a remake. Still, in the town of Tinsel, everything old is fodder for future financial payoffs. Enter the 2014 edition of About Last Night — san ellipses — from director Steve Pink (Accepted, Hot Tub Time Machine) and playwright Leslye Headland (Bachelorette) and featuring an entirely African American cast in the lead roles. Of course, on its face, this seems like a gimmick, an attempt to broaden the material’s appeal by catering to a more “urban” demo. In reality, it’s a stroke of genius, reinvesting Mamet’s original with both the cleverness, and crudeness, of its story of struggling singles on the make.

Best friends Bernie (Kevin Hart) and Danny (Michael Ealy) work as salesmen for a restaurant supply company. Roommates Joan Derrickson (Regina Hall) and Debbie Sullivan (Joy Bryant) are in the dental and advertising industries, respectively. Sensing his pal isn’t over his break-up with the certifiably psychotic Alison (Paula Patton), Bernie decides to take Danny out for a drink. “Accidentally” meeting up with Joan and Debbie, we soon see the dynamic at play. While Bernie is constantly chatting the ladies up, unafraid of one night stands and casual bathroom sex, Danny is more quiet and reserved. This intrigues Debbie and soon the two are dating. Over the course of a year, we watch as Bernie and Joan scream, scam, and seduce one another. In the meantime, Danny and Debbie get serious, go through some significant personal pressures, and end up discovering that, sometimes, it’s hard to make a relationship work.

Bringing the bawdiness back to Mamet’s original and hysteria in its constant conversations about human biology and genitalia, About Last Night is one of the best romantic comedies in a very long time. In fact, one would have to add the subgenre “drama” into the mix as well since director Pink and screenwriter Headland make sure we get equal parts scatology and seriousness here. This isn’t a meet-cute mediocrity built on actor personalities and stunts. Instead, this is an authentic feeling film about real people, characters we can relate to, sympathize with, and understand, acting in ways that don’t involve stupid slapstick, illogical motivations, or Hallmark card contrivances. By going back to the source, by avoiding the elements that made the 1986 effort so phony, the filmmakers have reinvented the material, making it modern while keeping its sentiments squarely set within the age-old battle of the sexes.

Everyone here is excellent. Hart steals every scene he is in, his motor-mouthed delivery matching the ferocity of the sentiments he’s expressing. Hall is his F-bomb dropping equal, offering  up a similar belief about romance and love while never seeming desperate or too defiant. As the calmer center, Bryant and Ealy are good, reminding those of us in long term relationships that commitment is not just a word. Instead, it’s a series of trials and errors where love, if its strong enough, outlasts the occasional lapses in judgment. Yes, Danny and Debbie go through a lot in this film, but instead of taking things to hyper-stylized extremes, About Last Night remains tethered to the truth, and as a result, wholly satisfying.

You can tell a successful romcom when it earns its emotions without forcing them through a filter of flawed Hollywood melodramatic hokum. About Last Night deserves every laugh and every tear it gets. The genre is almost always the beneficiary of less than stellar cinema. In this case, everyone involved delivers a fresh and funny film. 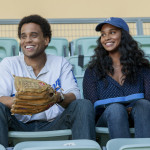 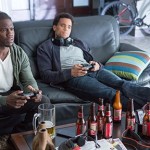 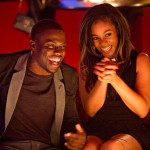