Coal would be an improvement.
Buy It From Amazon
Buy It On DVD
Buy It On Blu-Ray

In folklore, the Krampus is kind of an anti-Santa Claus – a horned, hoofed creature that comes around every yuletide season to punish the children who have behaved poorly. Nothing like getting your kids to comply by telling them a demonic-looking beast will show up to terrorize them on Christmas Eve, huh? At the same time, there’s something rather fascinating about the ancient tale, as it speaks to the idea that actions have consequences. Make poor choices and you may well find yourself in a bad predicament. The holiday horror-comedy Krampus takes this idea to crazy new levels.

Adam Scott and Toni Collette play Tom and Sarah, a married couple with two kids. They host her sister Linda (Allison Tolman), gun-loving brother-in-law Howard (David Koechner), and their children for Christmas. Tagging along is ever-complaining Aunt Dorothy (Conchata Ferrell). Tension begins immediately. Tom and Sarah’s son Max (Emjay Anthony), who has a bit of an anger problem, becomes fed up and explodes at everyone. His heat-of-the-moment actions summon the Krampus to the family home, where it begins to attack, with some assistance from its army of strange little helpers.

Krampus has a feel similar to that of Joe Dante’s Gremlins. While not quite at that classic movie’s level, it shares a playful sense of horror. The emphasis isn’t really on being scary so much as on finding humor in the way the characters deal with increasingly bizarre forms of torment. The creature relies on terrifying teddy bears, evil elves, and a platoon of hostile gingerbread men to carry out his wicked deeds. The family members are frightened out of their wits — with good reason — while we get to cackle at the bizarre sights and inventive mayhem. There are pitch-perfect one-liners scattered throughout, just to emphasize the intentional silliness of it all. Given the already exaggerated nature of Krampus lore, a more serious take might not have worked. The story needs to be a little wacky.

Director/co-writer Michael Dougherty (Trick ‘r Treat) made a very wise decision by casting Scott and Koechner in lead roles. These are comic actors. Putting them in a pseudo-horror film is a real against-type choice, one that lets us know Krampus is telling its gruesome holiday tale with a wink and a nod. Similarly, there’s a scene in which Tom’s elderly mother (Krista Stadler) relates the history of the Krampus; it’s animated to resemble an old Rankin-Bass Christmas special. These factors, combined with some excellent mostly-practical special effects, provide the movie with a delightfully witty, off-kilter vibe.

At times, Krampus feels like it wants to go a little further than it ultimately does. Both the horror and the humor stay firmly at a PG-13 level. There are certain moments that seem to be approaching a harder tone, only to stop short. It’s quite likely that a nastier R-rated cut exists, perhaps to surface on DVD at some point. If anything, pushing the envelope further would have maximized the entertainment value. After all, this is a movie about naughty kids (and their parents) being punished; why not take that idea to its full fruition?

Christmas-themed horror movies — whether straightforward or with a dose of humor — always have a certain ambiance. Juxtaposing traditional images of peace and joy with more violent or fantastical sights is a recipe for the bizarre. Krampus is undoubtedly slight, but it’s also a lot of fun as it rails creatively against the warm fuzziness of most cinematic Christmas fare. 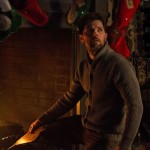 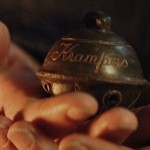 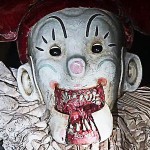