Matthew Vaughn clearly missed his calling. His style would have perfectly meshed with the insane Looney Tunes from the ‘40s and ‘50s. Put another way, if Fritz Freleng had dropped the pen and ink to make a live action James Bond film, the results would be something akin to Kingsman: The Golden Circle. If Michael Bay is the king of over the top bombast, Vaughn is his funnier, snarkier cousin. This doesn’t mean that the movie is good. It’s actually kind of messy. But it does indicate a level of chaotic creativity that few filmmakers possess, and for that reason alone, it’s worth your time.

Indeed, the opening cinematic salvo in this fledgling franchise had a much better grip on the whole spy game spoof than this sequel, and with good reason. It was introducing us to the world created by Dave Gibbons and Mark Millar in their comics, and it did so with wit and wonder. Now, things being established, Vaughn can go insane, expanding the universe while trading on the tricks that brought him to this point in his career (rumor has it he will he taking on Man of Steel 2 in the future). If more is more, Kingsman: The Golden Circle follows this formula implicitly.

Again, this is not a bad movie, just a confused one. We meet back up with our hero Eggsy (Taron Egerton, who does some really good work here) as he is taking his place in the Kingsman, as well as shacking up with Crown Princess Tilde of Sweden (Hanna Alstrom). When an attempted ambush leads to the destruction of the British spy agency, all that’s left behind is our novice spy and his support agent, Merlin (Mark Strong).

They head over to the US where they meet up with the American version of their group—the Statesman—and team up with Agents Tequila (Channing Tatum) and Jack Daniels (Pedro Pascal). Under the watchful eye of Champ (Jeff Bridges), head of the corps, they take on Poppy Adams (Julianne Moore), a criminal mastermind in charge of the terrorist organization known as The Golden Circle. Her goal—poison the world. Oh, and Harry (Colin Firth) is alive, and suffering from amnesia.

Kingsman: The Golden Circle is, for the most part, a lot of fun. It never takes itself too seriously (which is both a good and bad thing) and honestly believes in saying “Yes, YES, YES!!!” to each and any excess it can pile up on the screen. Remember the royal rumble that broke out in the church during the first film? Take that, multiply it by 100, and you’ve got this sequel. The acting is excellent, with Moore making quite an impression as the main baddie. Even the surreal sight of Sir Elton John (as a funny, fictionalized version of himself) allows for the inclusion of many manic musical keys that will have fan of the singer/songwriter swooning.

But for every good thing in The Golden Circle there’s something that strains to be relevant. It’s nice to see Tilde back, and her relationship with Eggsy does add a bit of spunk and spice to the proceedings. But it feels like fan service, and not necessarily needed. The same, sadly, can be said for Harry’s return. Clearly audiences enjoyed seeing the prim and proper Firth kick ass so much that they needed him back for Part 2. What does work is the whole Statesman angle, though we really don’t need Jeff Bridges doing his whole grizzled old cow poke routine once again, while Tatum takes the opportunity to spoof himself, and it’s a hoot to behold.

Kingsman: The Golden Circle is a decent diversion that gets more mileage than it should out of spectacle and extremes. If you liked the first film, you’ll probably cotton to this one as well. Just don’t be surprised if you feel overwhelmed when its call over. VERY overwhelmed. 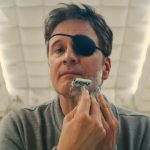 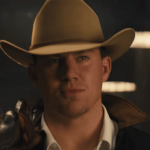 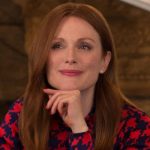 One thought on “Kingsman: The Golden Circle”