"I'd like to order liver with some fava beans and a nice chianti."
Buy It From Amazon
Buy It On DVD
Buy It On Blu-Ray

As the saying goes, “A better beer deserves a better can.” And in this case, a film can (or hard drive).

In 1983 Amsterdam, a group a discontented amateur kidnappers abducted beer baron Freddy Heineken and his chauffeur, held them for ransom for three weeks and received, at that point, the highest amount ever paid for a ransom. In 2011, a film was released documenting the Heineken kidnapping and the subsequent capture of the kidnappers, The Heineken Kidnapping, directed by Maarten Treurniet and starring Rutger Hauer as the put-upon Heineken. Now, a few years later, we have Kidnapping Mr. Heineken, directed by Daniel Alfredson (The Girl Who Played With Fire, The Girl Who Kicked the Hornet’s Nest) with Anthony Hopkins as an effete Freddy Heineken. Both films have their problems, but the newer version is flatter and less-full bodied.

It is dark, dank, and moody at Elsinore (that is, Amsterdam) as a group of disgruntled young ex-cons discover they suddenly cannot be irresponsible and that they have families to support. The boys include gang leader Cor Van Hout (Jim Sturgess), whose significant other is ready to give birth; Willem Holleeder (Sam Worthington); and Jan “Cat” Boellard (Ryan Kwanten) among others. A night cruise on the Amstel River enlightens them, Cor declaring, “This year I refuse to be miserable.” By that, Cor means that the best way to assume familial responsibility is to kidnap the local rich man, that man of course being Freddy Heineken (Anthony Hopkins). The boys construct a soundproof holding pen in an out-of-the-way repair shop, purchase the requisite stopwatches, rubber masks, and voice modulators and seemingly without too much difficulty snatch Heineken and his driver and whisk them away, awaiting their ransom demands. Unfortunately, the wait for the reward takes longer than expected and the group of kidnappers begins to pull apart as they wait for the money. Meanwhile, Heineken works on the psyche of his kidnappers, uttering weird aphorisms like, “You can have a lot of money or you can have a lot of friends, but you can never have both.”

Alfredson directs his film like a cheap beer commercial, all jagged editing and shaky cam stylings. Alfredson and his screenwriter William Brookfield also make a deadly aesthetic decision: to limit what happens solely through the point of view of the kidnappers. It is a hermetically sealed world in which the only way we know what is going on is when the boys watch the television. As a result, there are many television clips that have to be sat through with the kidnappers. When the kidnappers are finally discovered, it is more surprise than suspense, since we don’t know how the investigation is going in the first place.

And then there is Anthony Hopkins. As opposed to Rutger Hauer in The Heineken Kidnapping, who gives a grandiose performance, Hopkins here is coasting. One would think, given that Hopkins received an Academy Award for another performance in which he was locked in a room, that Freddy Heineken would be a plum role. Instead, Hopkins acts as if his incarceration is merely a three-week stay at The Toren. The best part of the film is when Hopkins politely demands Chinese food from his kidnappers and they comply. At least in The Heineken Kidnapping, Rutger Hauer gets his face stuffed down a portable toilet. 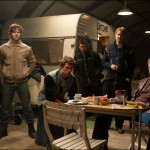 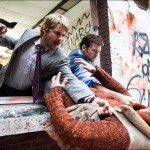 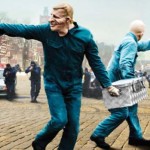